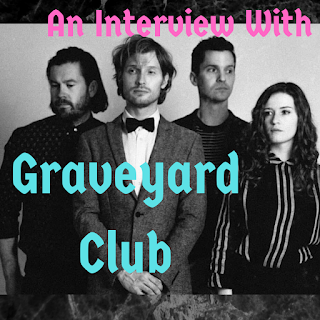 Twin Cities outfit Graveyard Club put out one of my favorite records of last year, Goodnight Paradise, a record full of what I lovingly refer to as "cemetery pop." The band recently released standalone single "Valens," an irrepressible, tear-stained shadowpop treasure that takes inspiration from the tragic death of (too) young Ritchie Valens. Lyrics like "Lost in a coin toss/a roll of the dice/isn't that the same way Ritchie Valens died?" are not only bittersweetly succinct, but also hit the exposed nerve of the very luck-of-the-draw moments that are an everyday part of life. How many lives are altered because of a split-second decision or action? "Valens" is another truly divine ditty from the Minneapolites, and once more shows their deft hand with turning the glum into a gorgeous pop song.

Longtime Fuzzy Logic readers might get a bit of a lightbulb moment right about now, because this is actually Matthew Schufman's second interview appearance for FL (check out Matthew's first interview hither). Seeing as it's been about six years, mind you, it's definitely time to check back in with the man behind the vocals/synth tomfoolery and see what's cooking in the world of Graveyard Club. Pull up a chair, get cozy, and read all about what Japan, the Sour Patch Kids House, and kayaking all have to do with Matthew as he takes on the Beatles Q + A.

Well, the year has turned into a strange one, and there hasn’t been a whole lot of excitement in the past few months, but we played the First Avenue mainroom this past winter, which for every Minneapolis band, is kind of a dream – it’s such a great venue. It’s strange thinking of live shows right now and I’m not sure what the future will hold, There are a lot of amazing independent music venues out there that will hopefully be able to continue after all this.

We all listen to different stuff, but there are some artists we all agree on. We all like The Cure, Arcade Fire, Big Thief, The Pixies, Beach House. Recently, I’ve been listening to the new King Krule record, the new Bright Eyes singles, Sea Wolf, Choir Boy, Dragon Inn 3, and Ruby Haunt.

Overall yes, I’ve had one or two really turbulent flights through the years and sometimes in those moments I get a little freaked out, but most flights I have felt safe. It freaks me out to read about plane crashes, though.

One of my favorite parts of touring is getting to see so many cities in a short amount of time. Some of them end up blending together but there are some unique ones that stand out. We all have our favorites in the band; Portland is great, we like New York a lot. We’ve played Iceland Airwaves a couple times and Reykjavík is an incredible place.

I don’t think there has been a single, unified message that we have specifically tried to convey. I think we’ve worked to create a more of a mood or aesthetic with our music. Lyrically, I have always appreciated songs that could have many meanings and I have attempted to incorporate that into our songs. I want listeners to find their own message.

I would love to go to Japan! That’s probably the top of the list.

No, there are so many amazing musicians doing great things. I think due to the internet, everyone is pulling inspiration from so many places and decades, so trends are harder to come by. We are just trying to stay focused on what we like and what inspires us.

Sometimes bands will ask us for tips or recommendations where to play (in Minneapolis) but otherwise not really. I don’t think we are well known enough to dispense advice…We are probably the ones who still need advice.

It’s always rewarding to play for an engaged audience, but we don’t really care that much, as long as people are respectful to each other (and us ;)).

Most songs start with a “bedroom” demo version that I create with a general feeling or melody – some are close to being finished and others are just rough sketches. From there Amanda, Mike, and Cory all write parts and help change or add to the structure.

I eat a lot of candy and nobody asks me about my favorite one. It’s Sour Patch Kids. There used to be a “Sour Patch Kids House” in Brooklyn and they would let bands stay there as they came through town. I emailed them so many times because I wanted to stay there and then, FINALLY, I got an “inbox full” message. They never wrote back. I looked into it and I don’t think it’s a thing anymore.

I don’t think we have ever labeled it ourselves, but most people tell us it’s a mix of new wave, dream pop, goth, and more modern alternative. I don’t think we’ve ever set out to have a “sound” on purpose, it’s been pretty natural.

I have definitely forgotten lyrics on stage, or mixed up verses a couple times, but knock-on-wood it hasn’t been too severe. One of the four of us usually has one weird mistake per show and afterwards we are like “Did you hear that!?” and most of the time none of us noticed haha.

We have wanted to do a European tour for a number of years, but it just hasn’t worked out yet. Maybe one day (fingers crossed).

In general? Probably to find things you actually like regardless of if they are popular or not. Be weird. Life is much more enjoyable if you don’t get too concerned with what people think.

When I was a teenager I went kayaking and got stuck underwater in some rapids for what felt like 3 minutes and I thought I was going to drown. It was probably like 20 seconds.

I have never felt like much of an entertainer, so definitely more of a musician. I enjoy playing live, and I believe that our band sounds really good in a live setting, but we aren’t like doing backflips or anything. Mike has never slid on his knees before any guitar parts. One time I stood on Cory’s kick drum but I was too scared it was gonna crack so I jumped off. Sometimes Amanda will throw in a fist pump with the hand she isn’t playing synth with.