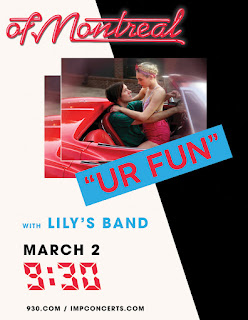 NPR called of Montreal "one of the most consistently captivating bands of the past 20 years." I'm sitting here wondering how it's been two decades already, but NPR isn't wrong. That Kevin Barnes has been able to keep his passion project going strong for nigh on two decades in this TL;DR world speaks volumes to his ability to create music that keeps the kids intrigued.

Barnes and of Montreal have a new record out, the cheekily-titled UR FUN, and as such the Athens space oddities are heading to a venue near you in early March.

As always, I strongly encourage you to snap up tickets just in case they vanish before the show. You can get your safety blanket tickets at this here link.

FINE PRINT: Contest is for two (2) tickets to this here show. Contest closes at noon Eastern on FRIDAY, 2/28/20. Good luck!