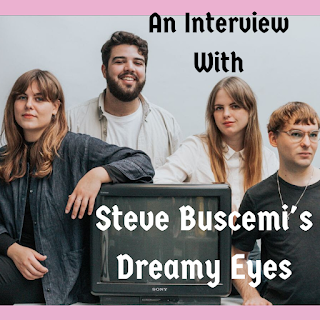 Stockholm's Steve Buscemi's Dreamy Eyes give you an idea of their sound just from the name of their debut LP - Sweetie (which just so happens to have a Valentine's Day release date). Their winsome, floaty dream pop is quite sweet indeed, as latest single "Set Me Free" deftly illustrates. It's not all candy hearts and happily ever afters, of course, but Steve Buscemi's Dreamy Eyes gives a starry-eyed sheen to their songs that's sure to warm the heart of even the most cynical among us.

Read on to get to know this adorable quartet, as they give the Beatles Qs a Scandinavian spin (Crows! Big in Japan! Making out at shows!). And seriously, be sure you get your hands on Sweetie, sweeties. A UK/Scandinavian tour is also on the cards, and hopefully some US dates in the near future.

Definitely the recording of the album! But also visiting all the places we’ve played in, all the way from Luleå in the north of Sweden to Malmö in the very south.

We can’t really agree on just one so we’re gonna pick one each.

In theory yes but in practice, not really…

Yes, especially London and Luleå. Exactly the same, Google it.

Our songs deals with all kinds of topics like politics, dinosaurus, dogs etc. The lyrics reflects our feelings about the topic and it’s often about some kind of frustration. We try to talk about difficult or problematic situations in a light-hearted way and with a touch of humor.

It's a cliché but one day we would like to be BIG in Japan!

It’s nothing we strive for, we mostly play and write songs because we like it and it makes us happy. We write what we write and if were setting new trends…? Well that's up to someone else to answer. We’re just having fun!

The ones that makes noise.

Surprisingly, yes! People sometimes ask us for tips and tricks about how to do when you want to release music, play gigs etc. We feel very special and important when that happens. So if you want to be nice and make us feel like pros, please ask a question about the music biz.

First and foremost, DANCE. Nothing gets us going like a dancey crowd! We also appreciate a good makeout sesh, a little love in the air is good for everyone.

We’ve had this “rule” for the past year to write one song per rehearsal. We can't really say we’ve lived up to this goal but it’s been a good way to get us going in the songwriting process. And when we actually write a song it usually starts with someone playing a bunch of chords, a riff or singing a melody and then everyone add their own instruments to it and eventually we have some kind of “body” of a song that we can further work on and polish.

Honestly any question that is not about our band name is an ideal question.

Yup, for example once Siri forgot the lyrics to a song but then the crowd saved us?? That was big, for sure!

Everything that Nickelback sings about in the song “Rockstar.”

Please listen to our music and make us cool in the world of teenagers! Maybe share our music on TikTok or whatever platform it is the youths prefer nowadays.

Once when Elias was 2 he sat on the floor in the kitchen at his granny's house when the roof suddenly started to collapse. Everyone ran out and little baby Elias was left to his fate but then at the last second, like in an Indiana Jones movie, he was saved by his aunt Halima!

Siri, however, is a “safe girl” and never stares into the eye of death except maybe when her asthma strikes.

And Tilde, who is not a “safe girl” is quite close to termination on a daily basis. Most recently when she was attacked by a crow and its friends, and we all know a pack of crows is called a MURDER!

Definitely a combination. Elias is more of an entertainer, he tells a lot of jokes for example. Siri says she is 0% entertainer and a 100% musician, but those who know her also know that's not entirely true, she has about 1 AMAZING joke a year, and boy it’s truly AMAZING! The “comp group” consisting of Edvin and Tilde is a nice mix of 50/50 Musician/entertainer.