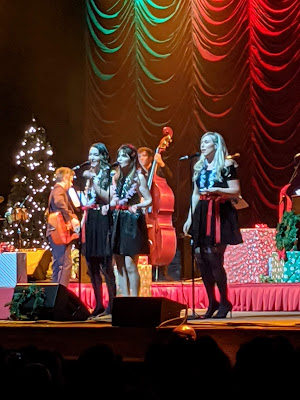 Live music connoisseur Ben Kirst has been to a show or two over the years and knows a thing or two about what makes for a good one. Read on for Ben's thoughts on the night She & Him hollied and jollied their way into DC.

What’s old is new: She & Him bring their mod take on Christmas to Washington, DC.

Back in 2016, The New York Times talked to Sight Unseen founder Jill Singer about the enduring popularity of mid-century modern furniture. Why — 20 years after it began trending in the late 1990s, which was already well over 40 years since it first hit the popular culture — did young people continue to aspire to decorate like The Jetsons?

“When this stuff was designed, it was specifically made to be democratic and to be lived with,” Singer explained to Steven Kurutz. “It makes sense that it has a wide appeal. It’s beautiful materials, classic simple shapes that can seem timeless. It’s not like a blob chair from the early 2000s. It just kind of goes with everything, somehow.”

As it happens, that’s also a fairly apt description of She & Him, Zooey Deschanel and M. Ward’s indie project: democratic, livable, widely appealing. You don’t have to be particularly cool to appreciate their rockabilly-tinged, jazz lite version of (mid-century) modern rock; in fact, it almost helps if you’re not, because She & Him make you feel a little cooler. A little touch of surf rock! A splash of the B3! Irony and sincerity, swirled into a delicious vanilla milkshake! She & Him songs do kind of go with everything, somehow; they are classic, simple shapes.

Which is fine. Not every musical experience needs to be a deep dive into obscure Velvet Underground bootlegs. Top 40 seems like it belongs to someone else as you get older. Hip hop and indie can feel the same way. Thankfully, there’s stuff like She & Him, comfortable as a cozy winter sweater, an easy escape when you want something vaguely familiar.

Deschanel and Ward brought the She & Him Christmas Party Tour to Washington, DC’s Anthem on Thursday night and it was very much on brand. Shimmering satin curtains? Giant gift boxes scattered onstage? Deschanel and her backup singers in shimmering black mini-frocks that Mary Quant would have approved of? Ward toting a white Gretsch (it looked like a Gretsch from a distance, anyway) guitar? A stand-up bass, a cool Hammond organ, and a drummer wearing one of those ski toques with earflaps? Check, check, check, check, and check. All the elements of a swingin’ holiday concert present and accounted for.

The tour began in Philadelphia on Wednesday night and it took the group a while to warm up — Deschanel was a little pitchy for the first half hour or so, and she noted that she was recovering from a pre-tour cold.

Still, the quintet (Ward on voice and guitar, jazz stalwarts Danny Frankel and Francisco Ojeda on drums and bass, respectively, Deschanel on voice and sleigh bells and a keyboardist who was not introduced — as well as backup singers Deschanel shouted out as Sarah and Jessica) drew the crowd’s approval with “The Christmas Song,” “Happy Holidays,” the She & Him original “Christmas Day,” and the old Bing Crosby hit (that's possibly more famous for the Rat Pack rendition) “A Marshmallow World.”

If you were lucky enough to see She & Him in New Haven, according to She & Him’s Twitter feed, you could have bought a special “Marshmallow World” drink at the bar: hot chocolate, Brandy, Bailey’s Irish Cream, whipped cream, and marshmallows. Gasp! You would even have been served this tasty treat in a commemorative mug.

Deschanel gamely teased the audience, noting there were a “lot of nicely-dressed people in the crowd,” foreshadowing the Christmas costume contest hosted by comedian Pete Lee later in the show. Ward then crooned through Frank Sinatra’s “Christmas Waltz,” his own voice throaty as a jolly Tom Waits, before Deschanel plowed through “Have Yourself A Merry Little Christmas,” drawing a few misty eyes from the group of couples gathered around me at the side of the venue. That one will certainly tug the old heartstrings after a few drinks, even when Deschanel struggles to unflatten her pipes.

And we were only getting started, folks! The hits just kept on coming. “Mele Kalikimaka.” “Sleigh Bells Ring.” “Christmas Memories.” “The Man With the Bag.” “Blue Christmas.” The mid-century modern mix of Christmas tunes — a 1950s feel, always in style, slightly square, with just enough hot guitar licks and drum fills to remind you that, somewhere deep in the DNA of those tracks, is the rebellion of the earliest days of rock‘n’roll. It's easy to forget that when Elvis recorded “Blue Christmas” in 1957, half the country thought he was filthy.

Deschanel introduced “Baby, It’s Cold Outside” by turning to the audience and saying, “Now, let’s talk about consent.” She and Ward switched the traditional male and female roles in the song, leading her to ask afterwards, “Is it less creepy if the woman is singing the creepy parts?” No, she decided, but did note that she loved the song.

More Christmas songs followed…and the band did seem to lock in. ”I’ll Be Home for Christmas…” “Magic in the Air…” “Little Saint Nick,” which featured Deschanel on the ukelele and a lyrical snafu in the middle that reduced her to peals of laughter… “Rocking Around the Christmas Tree…” Ward singing “Run, Run Rudolph…” more of those mid-century modern nuggets. You could almost see the white tree, glittering with silver ornaments.

During “Little Saint Nick,” two crowd members, dressed as Santa and Mrs. Claus, tried to walk onstage and were very politely escorted off by a large security guard. I thought maybe this was a put-on of some sort; it would be kind of bizarrely funny if St. Nick himself tried to rush the stage, but the performers took no notice. Then I saw Santa and Mrs. Claus at the bar. Bizarre!

As it turned out, they were actually participants in the aforementioned costume contest with Pete Lee, and apparently wires had crossed somehow. Embarrassing! In front of all those people.

The band chugged through “Sleigh Ride,” then took a break for the costume party. I decided at that point I’d had enough holiday spirit for the evening and disappeared into the pleasant cool night.

On my walk through Southwest DC, I passed the gleaming new apartment buildings around 4th Street SW — the Modern on M, Eliot on 4th — and the old neighborhood stalwarts like Studio Arena, the Southwest Library, Westminster Presbyterian Church with that big white cross against the gleaming silver columns — all mid-century modern. What’s old is new and safe and comfortable. Just like She & Him.


[words and photo of She & Him by Ben Kirst]

[posted 12.9.19]
Labels: Ben Kirst Guest Post Live Review She & Him She and Him The Anthem