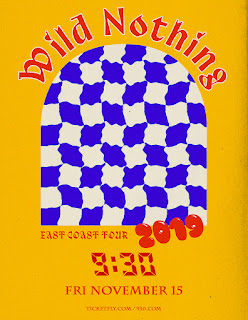 You love going to shows. I love giving you tickets to shows. It's a match made in heaven. Read on for how you can win you some tickets to a great show.

In the 9 years since Wild Nothing's debut LP Gemini was released, Jack Tatum's brainchild has released three more records, most recently last year's excellent Indigo and the live recording, Live from Brooklyn Steel, released in September. If you're lucky, you can snap up a copy of the latter on cassette on Wild Nothing's tour.

Speaking of that tour, Wild Nothing will be playing a hometown-ish (Tatum, after all, hails from the mountains of VA) show in DC later this month. Interested in seeing Tatum's icy cool dreampop gems in the flesh? Of course you are. And I've got a pair of tickets to the 11/15 Wild Nothing show at the 9:30 that you could end up winning.

***To be entered in the drawing, send me an email letting me know you're interested. I'll draw one very, very lucky winner at random.***

Of course, if you're worried about the show selling out (a valid concern), you can go ahead and order tickets here.

FINE PRINT: Contest is for two (2) tickets to this here show. Contest closes at noon Eastern on THURSDAY, 11/14/19. Good luck!