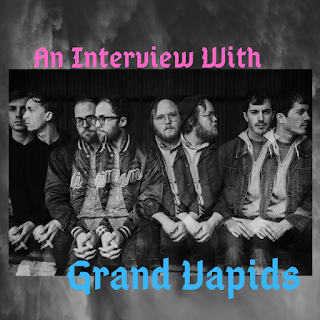 There's plenty to love about Georgia outfit Grand Vapids, and it goes well beyond their sardonically cheeky name. The foursome just released their sophomore record, Eat The Shadow, a collection of shadowy, haunted songs borne out of some pretty heavy shit that speaks to the dark places and gasping for breath that we all feel.

GV guitarist McKendrick Bearden gamely dove right in and channeled his inner Beatle. Read on to check out his answers, and be sure to check out Eat The Shadow. though I've still got questions (definitely need to know more about dodgy late night taxi rides in Puerto Rico). And if you happen to know anyone who can book Grand Vapids in Croatia, please make it happen. You'll be making at least one Vapids-ite's dream come true.

No way to answer this.

Logically of course I feel safe...but it is not an enjoyable experience.

To some degree yes....They never feel the same though

Not for me to decide I suspect.

Most places in the world. Most pressing is Mohovo, Croatia because I was instructed to go in a recent dream.

I don't have that feeling, no.

I love Teles and Offsets but will try anything. They're as unique as people.

Just to be engaged. I wouldn't classify our music as dancy but every now and then we have people dance and it's strangely pleasing.

Do you feel safe?

Definitely. Ever gone to a sensory deprivation tank before playing a show?

Pretty simple. I'd like to reach a point where my sole income is from music. Home ownership as well.

I was more than convinced it was the end for me in the back of a very questionable late night cab in Puerto Rico.

Probably more of a musician but I guess some kind of combination. Maybe 20% entertainer.