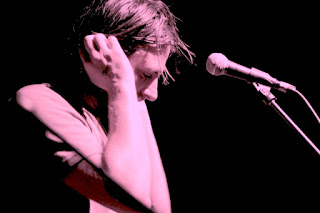 The night The Love Language came to DC was the night Aretha Franklin died. A voice known and loved for so long had been rendered silent and in its place there was a void; all of a sudden something was missing. In seeing this band, this band I've loved listening to ever since the release of their self-titled debut back nigh on a decade ago, there was a sense of catharsis, of celebration.

It had been a good number of years, too many years, since I had last swooned over Stuart McLamb and his cohorts in the flesh. The show at Comet Ping Pong was the first of the band's run of three dates with Bat Fangs, and the room was suitably heavy with anticipatory revelers for this quality bill. McLamb's ensemble was supporting latest record Baby Grand (out now on Merge), already the band's fourth lp.

Each of the dozen songs was exactly as it needed to be. Songs from Baby Grand mingled with those from the debut, Libraries, and Ruby Red, the high sheen of the recorded version of the newest songs stripped back to their rawest, grittiest edges. The band collectively had a fire in their belly, it seemed, and played with such intensity. The crowd's hearty reception to every song led McLamb to declare "tonight rules," and you aren't going to hear any disagreement from me. It did, in fact, rule.

Hearing old favorites like "Providence" and "Heart To Tell" and "SPARXXX" and "Pedals" gave me giddy schoolgirl goosebumps, not to mention the thrill of taking in the brazen, irrepressible shimmy of "Lalita" as the band's parting shot. McLamb's gift at crafting earnest, lovelorn vignettes hasn't abandoned him one bit over the years, nor have the older Love Language songs lost any of their considerable luster. Not that I necessarily needed the nudge, but the show also reminded that this band is simply transcendent onstage.

Seeing The Love Language felt like a heck of a fitting way to pay tribute to a fallen legend. After all, the best music holds such healing power, and the foursome's raucous, sweaty performance was revelatory and downright joyous.