An Interview With Wild Rivers 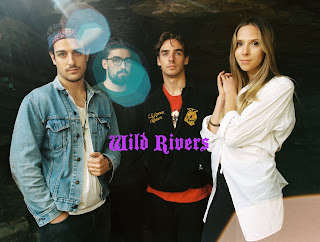 Toronto foursome Wild Rivers came up with a name for their sound, and it's pretty much right on the money - "Folk 'n Roll and Country Soul." Gorgeous boy-girl harmonies add heightened drama to the band's robust sound, honestly pinpointing acute emotional experiences with every note.

The band is currently touring their way through the US, playing songs from newest release the Eighty-Eight EP (and probably a few from their next record) to undoubtedly rapt audiences. They'll be here in DC this coming Thursday (8/9 - at Union Stage), so why not go spend your Thursday getting carried away with Wild Rivers? In the meantime, read on to see what the band had to say about all manner of things. Answers from Khalid Yassein, Devan Glover, and Andrew Oliver.
_______________________________________________________

D: Opening up for Donovan Woods on his tour this spring was definitely a highlight. It was our first opening tour, and we got to play in some bigger venues, which was really cool. We’ve also been fans of his for a long time, so sharing the stage with one of our favourite artists was a very special and inspiring experience. Recording the new record was also a highlight! Getting into the studio to build out the songs and see them come to life is the best.

D: Andy Shauf is a collective favourite. He's a Toronto-based singer/songwriter who self-produced, recorded, and played all of the instruments on his last record, The Party, which is an absolute masterpiece. It’s always inspiring to see so much talent coming out of your hometown.

D: I love airplanes! I’ve always found travelling very exciting. I always associate airports with good times. It’s nice to load up some podcasts and movies and just chill out for a couple hours.

K: I tell myself that I’m fine, but turbulence always gets me pretty nervous. I can get down with plane food though.

D: Definitely not! We’ve been touring in the US a lot this year, and the amazing thing about it is that every state could be its own country. The culture, the people, the music, and the food vary so much depending on where you are. For example, New York is nothing like Nashville, but both are great places, and that’s what makes it so exciting for us.

K: We’re not the kind of band that really focuses on getting across certain ideas or preaching anything to our audience, musically at least. I guess we try to make music that is true to ourselves and something that feels honest.

K: Honestly, West Coast US is something we’ve all really wanted to for a long time. We’re really excited it’s finally happening.

K: To be honest, not really! I think as songwriters and as a band we’re kind of traditionalists. While we listen to a lot of contemporary music, we’re definitely more inspired by classic artists from the 60s and 70s. We try to be a band that that is built on great songs beneath all the bells and whistles. We’re not reinventing the wheel sonically but we think the best part of our music is that it feels kind of timeless.

K: My main acoustic is a Cfox made in the 90s. I stumbled upon it in a shop and fell in love. It’s been my number 1 ever since.

K: Most of my song ideas come from jamming a chord pattern I like on guitar or piano. I then turn on the voice recorder on my iPhone and start trying to find melodies and lyrics. It’s usually 90% absolute nonsense, but I usually find a little melody or lyric that I like that I try to build around. At the beginning it’s pretty organic and free flowing and then I start to develop it into an organized thought or an idea.

A: Many times! Performing can be overwhelming and overstimulating; a lot of the time I will have a very fragmented memory of it, even immediately after. Occasionally I will see something happening in the crowd and start thinking about that, and then realize a couple minutes later that I am still on stage performing! I hope this is normal.

K: Musically, we have a ton! We want to tour the world, make more records, and reach more people. I don’t think we’ll ever be complacent with where we’re at and we all dream big. Aside from that I don’t know - maybe I’d like to be a better cook?

D: Be yourself. Being unique is cooler than being “cool”.

K: There’s nothing stopping you from doing whatever you want to do, even at this age. Work hard and it can happen.

A: Try as many things as you can until you find a passion, and dedicate yourself to that! Stay your path and everything else will get worked out.

K: As a touring musician I’ve logged a ton of hours on the road in the ole van, and with that I’ve had a few fender benders so that would probably the most.

D: As a live performer, you don’t really have a choice! The second you step out of your basement and in front of a crowd, your job is to entertain them by way of your music. It took some time to get used to the idea of being an entertainer, but forging a connection with the crowd is such a positive and addicting experience, that it started to come more naturally over time.

K: Agreed! I think we’re naturally more comfortable as writers and in the studio, but there really is nothing like performing live. They’re so different and we’re really lucky that we get to have the challenge of doing both.