An Interview With Ceremony 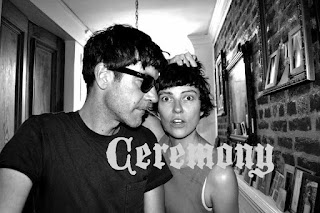 If you were to put together a list of the best bands in Virginia as of right now, Ceremony would have to be at the top of the list. The brainchild of John Fedowitz (Skywave), Ceremony recently released its fifth long player, EAST COAST. It's a big, beautiful beast of an album, a storm of swirls of controlled chaos and endless, utterly resplendent noise. Get the album, and listen to it often.

It was a pleasure to have John and Sandra take on the Beatles-y challenge. Read on to see what the pair likes to listen to, where they want to go, and much more besides. And be sure to get out and see Ceremony when they roll through your burg.

John: Being surrounded by 300 people plus in China was the most fookin cool thing ever. I don’t know if it was the promotion or the fact that an indie shoegaze band came to China or if they really wanted to see Ceremony.

Sandra: I guess so? At least they asked for songs while we were on stage. So I assume they knew what they were coming for. But just realizing that this big crowd came out to see us was amazing and crazy at the same time.

John: And second was the show in Czech Republic.

Sandra: Oh yes! A community center in the middle of nowhere, with millennials up to Generation X. Dancing and partying hard with us. They didn’t wanna let us of the stage. That was a lot of encores that night.

John: For the new stuff right now - Chad Vangaalen, Soft Moon, Beach House, but the old favorites that influence me in my recording style are The Cure, Sonic Youth, Ministry, and the Misfits.

Sandra: I would add PJ Harvey and DEVO.

John: I am sure I would feel safer in First Class.

Sandra and John: Fuck no!

Sandra: Every city has its on look and vibe. That’s what makes traveling exciting.

John: Depending on where you go, there could be a train or a river that splits a city.

Sandra: Or the people that look different.

John: Its just wonderful to experience everything. We don’t take any of that for granted.

Sandra: I wanna see the world over and over again.

John: Basically I use Fender guitars because they were bought left-handed. I wish there would be more choices. You can't just walk into a guitar store and pick a left-handed guitar. There might be ONE - either ugly or super expensive.

John: Yes. People contact me to ask about a certain bass or guitar sound on a song. Or what pedal to buy or if they should master their music this way or that way. And its hard to give them good advice because I still work in a analog lo-fi way. They are not used to these answers. I can tell they expect answers with a shit ton of newest recording equipment. Luckily no one wants my advice on girl trouble.

John: I don’t give a shit how they want to act. If they wanna throw stuff at us or kiss us. I welcome it all.

Sandra: Every crowd is so different. That’s what makes it so cool to play every night.

John: Right on the spot.

Sandra: Here is how we wrote EAST COAST. John wanted to have some beats so I would go down in the basement and recorded what ever came to my mind. Either free style or inspired by a song that I came across during the day. John listened to the material and the beats that inspired him right away got in the next round; John writing a bass line, guitar, vocals. Then I would listen to it again. It was the most exciting thing ever to hear what he heard in my beats. I had something in my mind when I recorded the beats. John either developed it or made something completely different out of it. I loved this process.

John: The first time I knew I was doing something cool on those songs that we were writing was when I started playing the base line of "Closer" and I got a text message from Sandra upstairs saying “this is awesome, keep going.” And after that it was pretty easy to work with the drumbeats that Sandra came up with because they were as good or better than I’ve ever wanted to play to. Which made me super excited to record this album in just a couple of weeks. It was pretty terrifying trying to come up with a good song to match the quality of what should be. I really like the new album.

John: What do you think about The Byrds?

Sandra: And have you ever gathered stones together?

Love songs with distortion, lo-fi postpunk, raw shoegaze with reckless abandon, psych. Pick the description you like, take it all or come up with your own.

John: Yes. Either a rhythmic pattern that’s off or a melody that is out of key. Or a feeling that you are all alone on stage and no one can help you. It seems to happen sometimes.

Sandra: Not a block-out but the awkward feeling for the whole night that something is not completely in tune or flowing right. Luckily it happens rarely for both of us.

John: Never wanna be a rock star but I want that next step. To be able to go across the world on a more regular basis and play music. I want to see the world and play music for the people.

Sandra: Sounds good to me.

Sandra: Go out there and do it. Don’t get discouraged by silly adult shit.

John: Be yourself, take advantage of the day by day and always remember where you came from.

John: I definitely feel more like a musician than an entertainer. It's hard to be entertaining on stage if you are the one that sings and plays guitar. I am working on it.

Sandra: Neither way. I still feel like as if I was just super lucky to stumble into this adventure.

John: I am so glad that Sandra is on stage with me entertaining everyone.

Sandra: Shit, I guess I should learn to swirl my drumsticks then.

John: Sandra, you are on keyboards next album.