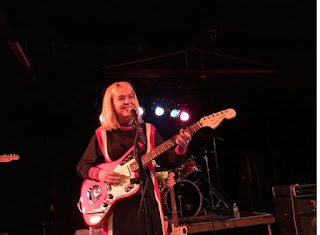 Intrepid mysterious Special Guest Star The Paper went in search of good live sounds, and the following is what transpired when he took in Snail Mail at the Black Cat.

At UN Fest several years ago, I discovered Wing Dam and immediately fell in love, thereby overshadowing my memory of all the other bands that played. In fact, I can't recall any other except the one that opened. Clearly Snail Mail made an impression even back then.

Sometime later, I saw them in the basement of Bleary Eye's parent's basement. Ray* played the drums and I was hooked. But then they fell of my radar. Fast forward to a record deal with Matador and I found myself in a long line outside Black Cat for their sold out show.

I must confess, I wasn't gripped at first. The tempo was slower than I was used to and Lindsay's voice seemed to lack urgency. Silly me to expect anything different from a band with snail in the name. Ray began to remedy the situation by never letting the beat drop between songs, which is something I wish more bands would do. He also tightened the snare on more than one occasion, giving it a crispier cadence that induced me to nod along. There was the satisfying crash and tingle of him hitting an open high hat as well. And I realized that it is sometimes harder to drum slower, but Ray nailed every kick.

Lindsey didn't have to steal anyone's heart. Everyone happily threw theirs on stage. Beyond simply singing along, the crowd often recognized songs at the first chord. I wasn't as well-versed, but it was easy to understand the passion. Her steady and disarming voice evoked dormant memories that had me fighting tears. Lindsey and company compel us to listen, to feel, to reflect, to change.

*I really appreciate Ray for booking all the best bands in the DC area over the years.


[photo by Ahmad Zaghal, words by The Paper]