An Interview With Ciaran Lavery 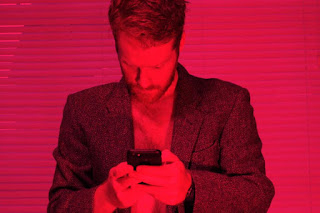 With his beautifully witty, penetrating lyrics and honey-coated, heart-on-sleeve poet's voice, Ciaran Lavery is my new favorite ginger. Lavery will soon be on US shores, touring his latest release Sweet Decay, songs of innocence and experience sure to leave you breathless. A natural teller of tales, Lavery is as gifted as a writer as he is a vocalist, his voice and words both able to tug heartstrings like nobody's business.

Ciaran plays here in greater DC on June 21 (at Jammin Java - buy your tix here), and if you're in town I strongly suggest you join me for what will undoubtedly be a towering performance. Read on to get a feel for Ciaran's disarming way with words, and if you happen to be in the path of his tour, don't miss out. Bring tissues and bottomless wallets...

There’s been a few, so in no particular order;
- sharing the stage with Langhorne Slim
- watching the finale of Godless on Netflix
- coming home to my dog Hugo after 5 weeks on tour
- Christmas morning
- every time I walk into a recording studio

This is very changeable but right now I’m very much into August Greene, and Devendra Banhart is also someone I’ve been obsessively playing. I always admire Sharon Van Etten’s music and her attitude. Big Thief were a huge find for me last year as well. I mean if I’m being really honest I sat up half of last night just listening to old records of Johnny Hartman - that guy’s voice could bring a tear to a teddy bear's eye.

Relatively, though I must admit, I have a habit of choosing terribly emotional movies and subsequently wrestling with the lump in my throat for fear of blubbering my eyes out in public. Did you know people are more emotional on flights? That’s a real thing. Some airlines even provide an emotional health warnings. Anyway, I regret watching Marley & Me, Toy Story 3, and Me, Earl & The Dying Girl in the skies, but maybe it’s made me a stronger person for it, who knows.

Sometimes. When I have limited time and all I see is the inside of some form of transport vehicle, a venue, a backstage area, and a hotel room then yes, everything can look eerily similar, like a Scooby Doo episode in some ways.

I used to consider this all of the time and I generally found myself having more questions than answers. I seem to be on a crusade of sorts to write as honest as I can, even if it makes me uncomfortable or uncertain if I can say these things. So maybe in some way I’m showing my bruises and saying “You know what, it’s ok, I fuck up all of the time, look, I get it.” People want to belong or feel understood.

Sometimes I’d like to go further into my past than I have delved before. I wonder how much I’d truly learn or understand of myself, to find those beginning moments or transitional times, when decisions I made formed the person that I currently am. I doubt I’ll ever be able to do that so I’ll say South America as a backup answer.

My ego would love to say yes here but that would be an outright lie. The only thing I’m trying to do is create music that I believe is suitable for the point of my life that I’m in right now. Every piece of music is a snapshot of a time in a life, it’s impossible to recreate because we’re always moving and evolving in some way or another, be that in a forward trajectory or backwards. The world moves, so must we by default. It’s never occurred to me to try to set a trend, I’d find that distracting or artificial. This is all I know.

Martin D-28 (my pride and joy)
Fender PM-1 (my tour baby)
Farida M-15E (my little parlour writing baby)
(And yes, I hope this does get me some kind of endorsement)

Yes, but I have to say that I find it more common that someone isn’t asking me for advice as much as they’re getting something off of their chest or expressing their own feelings and I just happen to be a pretty good listener on the other end of their thoughts. I find people are looking for empathy more than advice. It’s more likely they’ll do the thing they were going to do anyway, they just wanted a blessing of sorts or at least an ear.

I like them to weep, uncontrollably, then buy all of the merchandise they can get their hands on; that’s how I judge their levels of "fandom."

It really depends. For example, last night I came home and sat down with a pen and paper and wrote a song within 5 minutes. The lyrics had been stewing in my brain for a week or so and it all just fell out onto the page. On the other hand, there are songs I’ve been trying to lasso for the guts of a few weeks without much success. I’ve learned over the years when to leave things best alone and come back again from another angle. Sometimes it can be something as simple as the way I sit on the chair or which room I write in that can open up a vault between my brain, my hand, and the paper in front of me. You read tons of analogies about songwriting - how it’s like fishing (Arlo Guthrie) or being at a hot dog stand (Tom Waits). I find it’s kind of like going to a well and working the pump - some days you’ll overflow the bucket without as much as a touch and other times you could be there all day and you won’t get a drop; it’s knowing when to go there and how long to stay.

Why are you so damn handsome? My answer would always be “I really don’t know but I’m so glad you asked.”

I don’t. People are quite good at labelling that I tend to leave it up to them. How many times have you been describing a band/artist to a friend and said, “They sound kinda like...” and you rhyme off bands or records etc. It’s a natural thing we do to explain music, we find comparisons.

Every show. I consistently forget at least one full verse of a song per night. It's happened so regularly that I developed this technique that works for me. I tend to mumble in a quite inaudible way, so when I forget a line or verse I make sure that I rhyme the last line of every verse I forget, make sure those words are audible, close my eyes and make sure I’ve got the singer-songwriter expression on my face (pained/wounded, eyebrows furrowed) in order to look sincere and that’s all that’s to it. Easy.

Don’t be afraid to fuck up, you’ll be a better person for it.

Growing up in the country I’ve fallen out of my fair share of trees but I don’t think I’ve ever walked toward the light or anything close to it, YET. I’ve also never broken a bone. By saying this I now know I am likely to break a bone as soon as this interview goes out. Shit.

I like to think of myself as a song & dance man. I stole that line off of Bob Dylan, so maybe I’m a thief?