An Interview With Anna McCarthy (Dott) 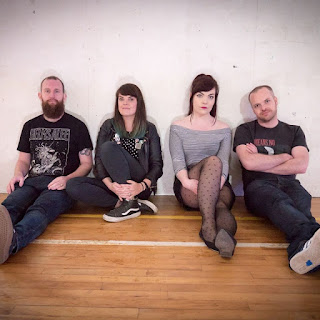 Ireland's Dott marries together pops of candied vocal sweetness with some seriously gritty scuzz for a listening experience that's altogether rather enjoyable. The Galway band just released a new record, Heart Swell, on Graveface, a collection of twelve biting, sugared nuggets that speak to love, politics, and the sea (and that's just for starters).

Anna McCarthy (vox/guitar) took a few moments out of what promises to be a busy year for Dott to answer the Beatles-y Qs. Read on and get to know the lady behind the lyrics (and some of those fearsomely fuzzy riffs).

Supporting one of my ultimate musical heroes, Shellac.

PJ Harvey, The Breeders, Steve Albini, La Luz, Beverly, Angel Olsen to name the first ones that come to mind.

Yes, although every time I do, I realise my odds of being safe are being stretched further.

Absolutely not... and I've been to both of the Twin Cities.

To try to do things that bring you and others joy.

No, but I should try harder to.

Telecaster true and true. (I've dabbled with Gretsch and Danelectro because I like musicians that use those, but Tele is the one for me)

All of the time. I work with children.

I try to let a melody come to me, and let it float in my head til it's ready. Then lyrics, then garage band demo. Then email it to the band and we put it together.

Would you like to take all of this money and spend it all on living your life making music and having a good time?

Too many times to remember.

Play guitar and go to gigs, and have a great old time for yourself.

Swimming into the path of a barracuda while snorkeling in Belize.

A combination of neither of them.