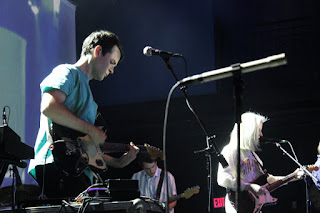 "I'm clearly losing my voice, but I'm just gonna keep trying if you guys don't mind." If Molly Rankin really was having vocal struggles on this particular evening, no one in the crowd was complaining.

The last time Toronto foursome Alvvays was in DC, they did a sold out two-night stand at the Rock & Roll Hotel. This time around, they did one very sold out night at the 9:30 Club. What a difference seven months can make.

What hasn't changed about seeing Alvvays is the experience itself. This Tuesday night show was as joyous a happening as was the October evening I had the pleasure of going to. It was also the band's last show of a seven-week tour, so there was a mix of enthusiasm and relieved energy coming from the stage.

As with that October show, the band started as they meant to go on, with a dizzying rendition of the jaunty "Hey." The fine fuzz pop of "Adult Diversion" followed, one of the songs plucked from the band's self-titled debut. It was back to Antisocialites for a smoldering "In Undertow," one of the best songs from last year's impeccable long player.

Alvvays spent a good deal of time with songs from their critically-lauded 2017 record, from the scuzzed-up bounce of "Plimsoll Punks" to the reckless abandon of "Lollipop (Ode to Jim)" to the bittersweet, heart-in-throat charm of "Not My Baby" (dedicated by Molly to the Toronto Raptors). The breathless impatience of my (current) favorite, "Saved by A Waif," inspired some gung ho air guitar from some of the crowd.

After a few more from Antisocialites it was back to the oldies, a triad of the wistful "Ones Who Love You," the sweetly reluctant "Atop a Cake," and the one many had waited for, "Marry Me, Archie." The singalong for the latter was a lovely thing to witness.

If you missed out seeing Alvvays on this tour, you'll definitely want to catch them next time around. A night with Alvvays is as good as it gets.