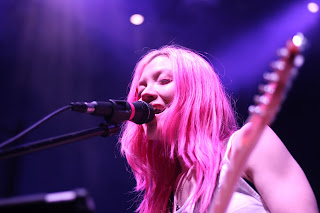 Intrepid mysterious Special Guest Star The Paper went in search of good live sounds, and the following is what transpired when he took in Now, Now at the 9:30 Club.

I first stumbled upon Now, Now when they still went by their elongated name. The tender rock sound that I loved upon first spin aged exceptionally well, so I had high hopes for my inaugural live experience. As my fellow colleague Intern Andrew put it in his Sunflower Bean review, I was afraid Now, Now would also suffer from a disinterested crowd as the opening band. The overly-crowded stage from the headliner's setup did not bode well, given the scant space left for the band to move about. Even Cacie made a comment about feeling confined. Thankfully, the band's sound did not suffer the same fate.

Cacie sat at the edge of the stage dangling her legs. The carefree singing and strumming of her guitar conveyed an intimacy I did not expect. It wasn't the intimacy that resonated, however. Instead, eschewing the presence of the crowd, she seemed to play for herself. A selfish act perhaps, but an act full of a genuineness sorely lacking today. We were treated to the same self-indulgence when she sat on the bass drum and playfully slapped the ride symbal. Brad, without missing a beat on the throne, kindly passed her a stick, only to take it away mere strokes later. Not to be outdone, Danny was dancing by himself, even doing two cycles of the macarena at one point, before resuming his guitar duties. 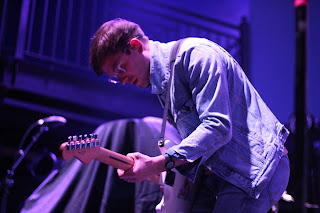 It was a pleasure to see a band having fun and playing music on their own terms, and with no pretense. In the same way one could hear a smile in someone's voice over the phone, each note carried the collective joy of the band.


[words and photos of Now,Now by The Paper]