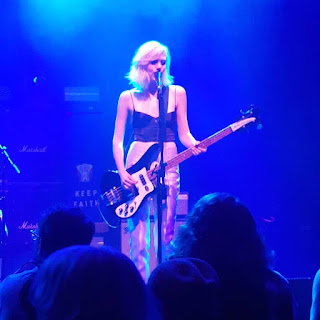 Intrepid Fuzzy Logic Intern Andrew went in search of good live sounds, and the following is what transpired when he took in Sunflower Bean at the 9:30 Club. When he's not getting his intern on, Andrew is the DC representative for UK campaign Girls Against, who look to raise awareness and ultimately end sexual harassment at gigs.

Shattered and drained from 2016 post-election misery, Sunflower Bean, Brooklyn’s premier trio of indie-psych rockers made their first visit to Washington, DC’s Rock & Roll Hotel along with a troop of fiery and passionate teenagers who had traveled with them for the majority of their East Coast tour. Engulfed with feelings of uncertainty and grief, the crowd that night channeled their collective worry and created mosh pits that seemed to be filled with inclusion and hope. The soundtrack was the driving pulse of Jacob Faber’s drums, accompanied by the neo-psychedelia and post-punk revival tag team of Julia Cumming and Nick Kivlen. The dripping wet arpeggios soaked in chorus and quaking riffs of phaser served almost as a battle cry for the Trump-era teenagers, themselves starving for immediate change.

A year and three months later, I queued outside the 9:30 Club, the brisk air chilling my bones on Valentine’s Day. I thought to myself, “will they be plagued with the dreaded support band blues?” It sometimes seems that being the support band is one of the hardest and most underappreciated jobs in music, having to battle for interest from a crowd who is primarily there to see the headliner, and slowly grind your way to respectable applause. Outside the handful of ecstatic screams and cheers from a small delegation of kids, Sunflower Bean walked onstage to golf claps from a relatively disinterested throng. The brilliance of the blossoming indie band was shortchanged by the confusion of a crowd hungry to see what they paid for in the pounding noise pop act, Sleigh Bells. The strange, unlikely pairing of bands hurt Sunflower Bean, except in terms of their performance. 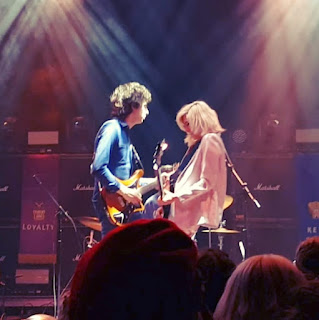 Sunflower Bean’s new set of songs from their highly-anticipated sophomore album Twentytwo in Blue conveys the same growling noise and sonic kaleidoscope as their debut album, but with obvious development in lyrical content. Add in several drops of glam rock influence to the mix and you get songs like “Crisis Fest,” a very befitting tune to play in front of a Washington, DC crowd, as they didn’t shy away from politics. Live, the band continues to invoke a familiar teenage call-to-action that inspired many (myself included) a year ago. The lyrics were very straightforward and sharp as Sunflower Bean critiqued the Trumpian society around us; The realization that any leftist progress can be ignored under this conservative rule, the threat of nuclear war, the student debt crisis. Cumming critiqued all of the above while Faber and Kivlen’s Marc Bolan-esque groove smoldered behind her.

The disinterested throng finally seemed to warm to Sunflower Bean’s enthusiasm and appreciated their moxie, given that the cheers and applause grew to be quite genuine following their new tracks along with setlist staples “Easier Said” and “I Was Home.”

Sunflower Bean will unveil Twentytwo in Blue on March 23rd, and it’s my hope that when they return to DC to headline the Rock & Roll Hotel on June 2nd that they’ll be warmly welcomed by an appreciative crowd who have had time to listen to and embrace the band’s maturity and well-crafted songwriting. This new era of Sunflower Bean will no doubt attempt to achieve Kivlen’s dream, mentioned in an interview with The Fader, of having real do-it-yourself indie reach out and connect with a bigger audience. "I just want our generation to have its moment... for our Nevermind to come out. Like an album by any band that will just be true rock music that will just get really popular..."


[words and photos of Sunflower Bean by Andrew JW Koh]