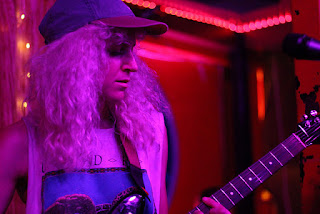 Intrepid mysterious Special Guest Star The Paper went in search of good live sounds, and the following is what transpired when he took in Chastity Belt at Songbyrd Music House.

Admittedly, I am a Chastity Belt neophyte, though I have wanted to see them for a while now. The four piece, on tour to support their third record, I Used to Spend So Much Time Alone, have built a lot of hype so I figured so many people can't be wrong. This sentiment was further confirmed Friday night when I ran into Ahmad. His taste and knowledge in bands is second to none. However, much like Animal Collective, another band that I decided to check out due to their popularity among the scene, I did not understand the appeal of forced celibacy. 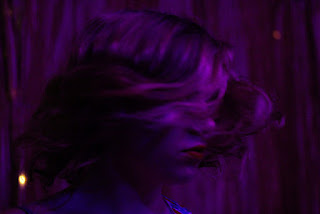 There was nothing inherently bad about the sounds that pierced into the sold out crowd. In fact, the intricate manner in which all sixteen steel strings on stage intertwined with each other was a work of art. This is especially true of the guitars. Julia and Lydia strummed with astronomical precision, sending each vibration at all the right frequencies and intervals. Annie and Gretchen were not far behind, carving contagious cadence into space and time. Everything was moving in thundering tandem towards the promised land but we never arrived. I felt myself on the precipice of release but never going over. It was very frustrating. I silently urged the band to speed up. They never did. Instead, they slowed down and one by one they dropped out until only Julia remained playing. Then she, too, trailed off like the sunset. At the conclusion, she took off her hat, tussled her hair then replaced it. The unconcerned, mundane manner of that action sparked something in me. There's no rush. There might not even be a destination.

Simply focus on the present.

[words and photos of Chastity Belt by The Paper]