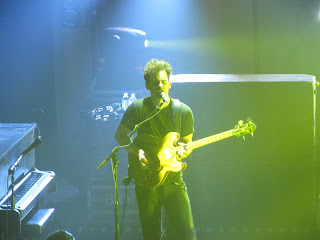 For me, Black Rebel Motorcycle Club is, and has been for years, one of those bands that I can always count on to show a gal one hell of a good time. I could see them a hundred times, and it would probably always feel like seeing them for the first time. So, as you might expect, I was thrilled to bits to see them here in DC this past May. And, as you might also expect, BRMC didn't disappoint.


Touring their sixth studio LP, Specter At The Feast, the band packed our venerable local venue, the 9:30 Club, and we the assembled were in for quite a night. They must have played for over 2 hours, and absolutely stormed through a set packed with the new and peppered with old favorites. The new songs were blistering testaments to the rock ethos that BRMC has established over the years, all black-clad riffs and beautiful drone.

The oldest of their songs, songs I've loved for over ten years, such as "Red Eyes And Tears," "Whatever Happened To My Rock & Roll," "Love Burns," "White Palms," and especially "Spread Your Love" warmed the blood and got the juices flowing. "Sweet mercy," I wrote in my notes. As the years go by the band loses none of the bite found on their debut LP, and the live versions always morph into gorgeous, monstrous images of themselves.

I was also pleased to have "Beat The Devil's Tattoo," "Ain't No Easy Way," "The Window," "Conscience Killer," and "Stop" included in the set, touching upon various stages of the BRMC progression. The new songs fit right in, loud and aggressive and impossible to ignore. I was particularly taken with "Lose Yourself," the sprawling, dreamily blissful close of the new LP. An impeccable lighting display offered further enhancement, though this is a band that would be more than fine with just simple spotlights while their songs do the talking.

Whatever happened to my rock & roll, you might ask? It's alive and well, and under the thumb of Black Rebel Motorcycle Club.