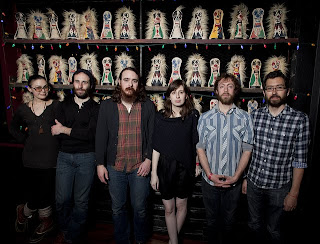 You might well have heard, friends, about one heck of a show going down tonight at the Velvet Lounge. Fuzzy favorites, twangy Appalachia-folksters from up NYC-way, The Loom, are smack dab in the thick of the bill (which also features the talents of The Caribbean, Archeology, and Mike Boggs of We Were Pirates). It's my second show with The Loom, which really ought to tell you something about just how dang good they are.

John Fanning, he of the misty mountain morning, front porch vocals, took a few moments to answer some questions, answers to which you'll find below. Spoiler alert: John digs him some Neutral Milk Hotel. Come on down to the Velvet Lounge tonight to see if you can hear this inspiration peppered throughout those glorious songs of The Loom.

Fuzzy Logic: How the hell are you?
John Fanning: Great! So excited to be coming back to DC on Saturday.

FL: What was the last song you listened to?
JF: "Volunteers" by Megafaun. Such a great hot-weather song. I can't wait to hear their new album.

FL: Playing music is:
JF: The most fulfilling, wonderful, and inspiring thing i've ever been lucky enough to be able to do.

FL: What album most made you realize you wanted to make music?
JF: Cliched, I know, but Neutral Milk Hotel's "In the Aeroplane Over the Sea." It just created this whole universe-unto-itself that made me really feel for the first time the magical and transporting powers that music holds. I bet a lot of people (myself included) have a period in their lives where they felt as if they were actually sort of living in the universe that that record created.

FL: Half-full or half-empty?
JF: Depends on the day. I try for half-full, but sometimes I end up on the other side. Usually depends on my caffeine intake at the moment.

FL: Which of your peers do you think is making the best music these days?
JF: My friend Jesse Rifkin had a band called The Wailing Wall that he recently disbanded. That said, we did a tour together last winter, and the songs he was playing then for the new project he's starting were just utterly mindblowing and really resonated with me strongly. I can't wait wait until they're recorded.

FL: What’s the first thing you think when you wake up in the morning?
JF: How fast can I possibly get to the coffee shop next door?

FL: Little-known Loom fact?
JF: Our bassist Dan grew up in Alaska, which as far as I can tell gives him about 10,000 cool points.

FL: The greatest record store in the world is:
JF: I've always loved Newbury Comics in Massachusetts where I grew up, probably because that's the one I associate most with my music-obsessed suburban teenage years, where I would get dropped off at the record store and just walk around the aisles for hours.

FL: Best piece of advice you’ve ever been given?
JF: If you're not stopping to enjoy all the things that you're experiencing, what's the point? I'm still trying to more successfully follow this advice.

FL: If you were so inclined, whom would you form a tribute band in honor of?
JF: I think it would be really fun to be in a Neil Young & Crazy Horse cover band, if only for the sheer challenge of trying to play all those amazingly epic guitar solos.

FL: Best song ever written?
JF: Along the lines of the above, I'd probably have to say Neutral Milk Hotel's "Holland, 1945." It just encapsulates such a broad spectrum of emotions - from absolute dread to unhinged joy - in just over three minutes, that it's kind of incredible.