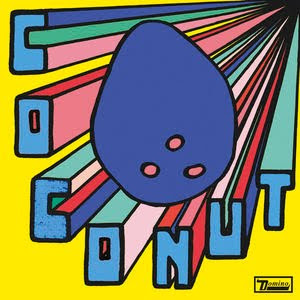 Why I Decree it to Be So:

The odds of being fatally wounded by a falling coconut are about 1 in 250 million. In comparison, the odds that you’ll fall madly in love with the third Archie Bronson Outfit record, Coconut, are substantially higher. I first fell in love with ABO back in 2004, upon the release of their debut Fur. It was a dark, heady, big bastard of a bluesy rock record, the kind of album that’s drenched in boozy sweat and reeking of ciggies and mornings after. In short, it was fucking brilliant, and I was in fucking love. Derdang Derdang, the second Archie Bronson Outfit record, left some of the filthy blues behind it, relying more on sheer size and scope and noise to see it through. It was sharp and severe, and it was another fine, fine record. Sure, we all expect fine things from bands signed to Domino, but even so, it was a fantastic record. And then, to my chagrin, the boys seemed to vanish. For years there was not a peep, and I feared the worst (i.e. a breakup). Happily, though, this wasn’t the case. And I’ll tell you what, my lovelies, the wait for Coconut was well worth it. Right from the start, this record blew my mind. Once again, ABO turned their sound on its arse, and oh my heavens it’s amazing. “Magnetic Warrior” is choc-full of sordidly tribal drumming, charmingly muddy vocals, and a whole lot of noise. Oh, and it’s frighteningly loud (and sounds best played at deafening volume). Upon hearing it I knew in an instant that I was in for a treat. And it gets better, friends. Single “Shark’s Tooth” is painfully good. The chilling, razor’s edge of the guitar, the maddening noisy swirl, the overwhelming feel of fucked-up love that’s come to be so familiar in Archie Bronson songs…it’s nigh on breathtaking. They don’t let up, because next comes “Hoola,” a groovy little song with a more than slightly bawdy bassline that makes me want to do all sorts of bad things. But wait, you say, that’s typical Megan. Well, friends, what can I say, the ABO just brings out the extra saucy in me. (SEE MORE)