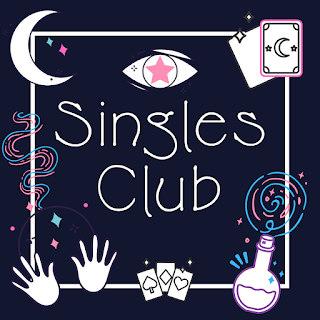 Consider Singles Club your musical matchmaker. I do hope you'll give all these ready-to-mingle bachelors and bachelorettes your ear as you listen to some new favorite tunes. Read on in the hopes of finding your musical love connection.

My birthday is tomorrow, but I'm struggling to feel at all celebratory when there is so much darkness happening on a daily basis. I'd like to take this moment to remind you to support your fellow humans however you can, whether it's donating to one of many important causes, getting out and protesting, and educating yourself. Also, I'd like to remind you to not be an asshole. We're all equal, we all deserve the chance to live our lives and try to be happy for as long as we're in this mortal coil. With that in mind, I hope these three songs will add some bounce to your step and some shimmy to your Sunday.

BBD mastermind Jonathan Bates has been a synesthete since he was a youngin, and says of "Canary," "if I could show what I see, you’d get sunburned." Since he can't show us the visuals, he shows us through sound. "Canary" is a sleek, skyscraping synth sunburst, a song that hits dizzy heights before gleefully pulling the magic carpet out from underneath. It's a look at what upcoming LP 4 has on offer, and it sounds like that's going to be a heck of a record.

"Feelin' Lost" doesn't sound like the work of a teenager, but Low Lite's Lorenzo Gordon is indeed in the twilight of his teenage years. At just 19 Gordon already shows an impressive aptitude for constructing a beat. His latest features sultry vocals by Yazmin and sticky, bluesy guitar from Stephen Maxwell, both guests adding to what was already a pretty nuanced little number.

According to LA-based Gordon, "Technology has given us an understanding of the world around us and the most powerful means of which we have ever had for harnessing sound." With "Feelin' Lost," Low Lite takes his electronic sound and elevates it into something both nodding to the past and hurtling into the decade ahead.

Young Ejecta's "Call My Name" is a winsome, cinematic, dandified electropop love song. Of sorts. "I get a bit sweeter when you call my name," coos Leanne Macomber against the glossy, sinuous synth fantasyland pulsing and swelling behind her. From the duo's upcoming LP Ride Lonesome, "Call My Name" is a song that sounds plenty sweet on the surface but hints that all is not completely golden.

Macomber's voice at times carries a whisper of wistfulness, and Joel Ford's highly-polished soundscapes have a starry-eyed sheen that offer plenty of style and substance. An entrancing effort from a record that's sure to be an intriguing listen.