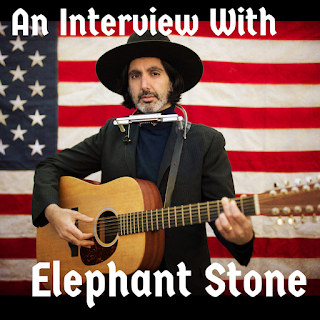 White picket fence. Two kids. A dog. A 9-5 that pays well. Dinner on the table. Success. Don't forget success. The myth of the American dream has been around a long time, and these days it's looking especially tarnished.

Elephant Stone's new standalone single, "American Dream," is the band's celestial, psychedelic take on the protest song, the subject matter is the fallacy of said dream. It's a song that doesn't hold back, though the well-deserved criticism is coated in waves of the Canadian band's luxuriant, ethereal swirls and delivered in Rishi Dhir's dulcet vocal tones.

Already out on Bandcamp, the single sees a full release on May 29th. All Bandcamp proceeds are going to the COVID-19 Relief Fund (a fundraising vehicle set up through PLUS1 to help those in the music industry who have seen their livelihoods disrupted by the pandemic), so all purchases will be going to something both special and urgently necessary.

"American Dream" was written by Elephant Stone frontfellow Dhir in lockdown, and expresses a certain frustration and disillusion exacerbated by recent events. "I don't want no more of this American dream," Dhir sings ruefully. It's a sentiment shared by an untold many, captured in a spirit that somehow manages to call to mind a time when today's current events would be considered no more than science fiction.

On a happier note, however, Rishi was gracious enough to spend some time with this clutch of Beatles questions. Read on to get to know a little bit more about Mr. Dhir, and make sure to check out "American Dream," latest LP Hollow, or anything from the exceptional Elephant Stone back catalog while you do so. At some point in the future, when it's safe for bands to get back to touring and for fans to get back to seeing live music, I highly recommend seeing Elephant Stone live (just don't talk over the sitar, for heaven's sake).

Selling out a bunch of dates on our February European tour... man, that feels like a lifetime ago...

Where to begin? Well, I guess it really starts with the Beatles and then it spreads out from there.

I always get a bit panicky when crossing over a body of water and do not handle turbulence very well. Now there's the whole recycled air thing to contend with...

Not at all. Each city I've visited gives off a certain vibe that is unique. Man, I miss touring...

I guess the constant thread through my lyrics/songs is the need for empathy in today's society. We need to feel more connected to each other and this can only be accomplished through empathy.

Not at all. However, by the nature of creating art, I am interpreting music/ideas that are already out there.

Yes, social media has made me very accessible to our fan base and I'm always open to give my advice.

However they want just as long as they don't talk too loud when I'm play sitar. That always annoys me.

Strum a few chords that follow a melody the reveals itself in a time and place.

What's the secret behind your pizza?

Too often... I have forgotten lyrics too many times...

I try to live my life in a way so that I never have to feel like I missed out on anything.

Be yourself, be kind, and do not give into peer pressure.

Climbing a volcano with my wife in Indonesia.

Musician. I lack the confidence/charisma to be a true entertainer.