An Interview With Ben Trow (Seazoo) 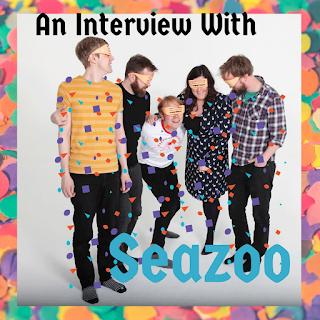 Things that have been said about Seazoo's music that are very much true: "a cavorting chunk of freewheeling indie pop," (NME); "a haywire piece of pop gold that will ensnare your heart on first listen," (The Line of Best Fit); "Seazoo may well have a valid claim to being one of the purest, most authentic indie-pop bands around at the moment,” (PopMatters). Listening to the Welsh band's latest LP, JOY (released last month), all of the above becomes instantly validated. The songs on JOY are rambunctious, clamoring moments of jubilant jangle, full of the most fetching irreverent charm and sheer delight.

Obviously, Ben Trow (vox/guitar) was trying to bring something uplifting into the world with the band's second record. As he told When The Horn Blows, it's "an album made for dancing around the kitchen." I can't comment on the kitchen thing, but I may or may not have danced around my bedroom like a crazy person with JOY in my ears. But I digress. Read on to get a glimpse into the inner workings of Seazoo (Vinyl! Alps! Marathons!), thanks to Ben. Might as well hit play on JOY while you're at it, so as to get the full effect.

Regretfully, as is the case with so many artists, Seazoo had to cancel their tour of JOY thanks to the Covid-19 pandemic. If you like what you hear from Seazoo (and of course you will!), be sure to pick up the album (and/or some sweet Seazoo merch).

Definitely when the shipment of records arrived at the house ! This is the first time we’ve had an album on vinyl - so when they turned up on a massive pallet me and LLinos went mad!

Yup! Very much so! What could possibly go wrong?

That differs with each recording. With this one there’s a kind of escapism to it, a theme of trying to appreciate things that are easily taken for granted.

The French Alps during the winter months.

Ha! Not really. Just doing what we’re doing but trying to be as creative as possible. It’s pop music ultimately.

Live I mainly use an Odessa Deadbeat - it’s ace! I have Fenders too. And a Taylor Big Baby acoustic.

From time to time. Get in touch!

Go mad! Or not. It’s up to them! We always like to have fun playing live, so like to see that in the crowd too.

Usually on an acoustic. Then I’ll demo them adding extra instruments. I’ll make a few demos and try out arrangements etc. Then I’ll take them to the band - easy!

Want to record your next album in my million pound studio?

Every so often! But it’s ok, gigs are meant to be spontaneous, so mistakes can be part of the charm!

To run a sub 3-hour marathon.

Practice the things you love.

I got the flu a few years ago, that’s about it! Although Llinos from the band fell down a 6 foot hole and smashed her head and actually nearly died!

I’d like to say musician firstly. But I do enjoy playing live and having a laugh on stage, so maybe a mixture of the two. But I guess the music always comes first.