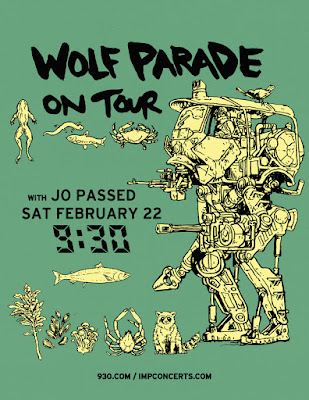 “Thin Mind refers to the way that being around too much tech has made our focus thin,” Spencer Krug explains. Indeed, there's something heavy underneath the buoyant bounce, seriousness under the band's engaging eccentricities. “It’s opening one more page, scrolling one more thing, and the weird, sort-of hollow automaton feeling that you get from it,” offers Dan Boeckner.

Wolf Parade is touring their latest Sub Pop release, and they happen to be heading to DC. If you'd like to see the band unleash their latest (and greatest) on the 9:30 Club stage, read on.

I'm giving away a pair of tickets to the 2/22 DC show, which might just be yours. To be entered in the random draw, send me an email letting me know you're interested in winning. One lucky lord or lady will win the tickets.

PSA: It's never a bad idea to procure tickets in advance, even if you're feeling lucky. To scoop up some Wolf Parade tickets, head to this handy dandy link.

FINE PRINT: Contest is for two (2) tickets to this here show. Contest closes at noon Eastern on FRIDAY, 2/21/20. Good luck!