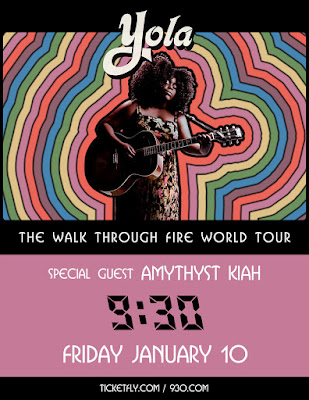 You love going to shows. I love giving you tickets to shows. It's a match made in heaven. Read on for how you can win you some tickets to a great show.

There are voices, and there are voices. You know the difference. There are certain voices that can stop you in your tracks, tug your heartstrings, and basically penetrate your very being. It's safe to say Yola has one of those voices. Her rich, molten tones are a little bit country and a little bit soul, and her sound has cast a spell on everyone from Sir Elton to the Grammy folks (who gave her four, count 'em, four, nominations).

If you've found yourself captivated by the divine Miss Yola, you're in good company. You're also in luck, because she's touring her Walk Through Fire record as we speak. The tour struts through DC next Friday, January 10, and you could win yourself a pair of tickets to bask in her presence as she takes over the 9:30 Club.

To be entered to win a pair of tickets to witness this marvelous maven of sound in person, send me an email. I'll draw a winner at random.

Worried about the show selling out? That's a valid concern. Snap up your just-in-case tickets to the show for your in advance by following this link.

FINE PRINT: Contest is for two (2) tickets to this here show. Contest closes at noon Eastern on THURSDAY, 1/9/20. Good luck!