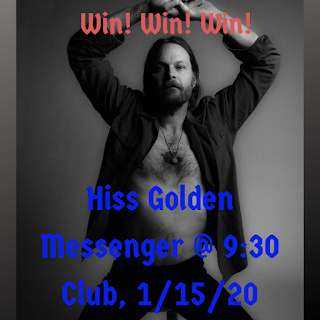 M.C. Taylor's Hiss Golden Messenger has been making magical, mercurial Carolina music for over a decade now, his songs reflecting ever-changing emotions and incorporating all manner of Americana, soul, folk, blues, and just about everything in between. As the Merge bio page cannily puts it, "There's nothing else quite like it." That's no lie.

Terms of Surrender, Hiss Golden Messenger's 6th Merge release, landed last September, so it stands to reason that'll be a focal point of the current HGM tour. Which, by the way, happens to be heading for DC on the 15th of January (i.e. next Wednesday). If you'd like to see Taylor and his compatriots make beautiful music at the 9:30 Club (and trust me, this is something you should want very much), read on.

To be entered to win a pair of tickets to this Hiss Golden Messenger experience, send me an email. I'll draw a winner at random.

If you get your tickets early, though, rest assured that you're doing some good. $1 from every ticket will go to the Durham Public Schools Foundation. Snap up your just-in-case tickets to the show for your in advance by following this here link.

FINE PRINT: Contest is for two (2) tickets to this here show. Contest closes at noon Eastern on TUESDAY, 1/14/20. Good luck!