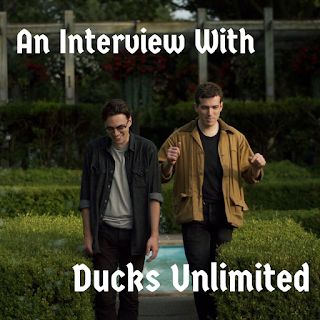 If you're not already familiar with Ducks Unlimited's Get Bleak EP, you're doing your ears quite a disservice. The Toronto twosome successfully channels peak 80s excellence from not only the Glasgow School but also Flying Nun Records in their four-song effort, a combination that makes for dancing-in-the-drizzle bliss. The EP's closing track, "Anhedonia," also happens to be one of my favorite songs of the entirety of 2019. I'm rather a smitten kitten for this duo, and I'm crossing my fingers 2020 sees them having a very good year.

And now, why not take a few moments to get to know half of Ducks Unlimited, front fellow Tom Mcgreevy, who was quite a gentleman and a scholar in his answering of the Beatles Q + A? Insights into one of Canada's most promising outfits abound, including Tom's thoughts on Morrissey, Alvvays, and urban developers...and much, much more (someone get these two to Australia!). Put your feet up, put on Get Bleak, and enjoy.

This is maybe not the coolest answer to this question but it's an honest one: when Pitchfork reviewed our EP. It was so utterly unexpected and to have someone write so thoughtfully about a thing we made in Evan's bedroom was a really weird feeling. Kinda made me feel like my head was going to explode.

The Go-Betweens are a pretty big deal for us. They're Evan's favorite band and he introduced me to them around when we started playing together. I really love The Verlaines, particularly their first two full lengths, and Orange Juice. Recently I've been obsessed with Close Lobsters. A few years ago I would have said Morrissey but his public awfulness has really spoiled his music for me. A lot of the terrible things he's been saying in interviews are things he was saying in his songs for his whole career and I feel like an idiot for giving him the benefit of the doubt for so long.

In terms of more current stuff I think Alvvays are really good. There's also a newer Toronto band called Pax that I've been very into lately. Their song "Clingfilm" is one of my favorites of last year.

Yes! I actually really like flying. I moved around a lot when I was a kid so we'd often be flying to visit my grandparents etc and I think it left me with a bunch of positive associations. In a weird way it feels like home.

No, they each have their own distinct sets of landlords/condo developers with their own particular stylistic flourishes. I like how the ones in Bushwick are all into installing the same blocky black window casings and big black doors with the glass panels for the outside door. It for some reason has always struck me as an odd aesthetic choice being made repeatedly by someone who absolutely does not give a shit. A simple gesture that really communicates their contempt for other people!

I don't think that's something we've ever really thought about. We're honestly really surprised that anyone is listening to us at all!

Australia! Evan is from there so I guess it doesn't count for him, but one of this band's maybe silly goals is to tour there one day. We're also trying to get sued out of existence. It feels like we're getting closer!

I play an Epiphone Casino that used to belong to Evan, and Evan plays a Fender Jazzmaster. We played a few other things on the EP including a Fender Mustang that we bought in the suburbs of Calgary when we played Sled Island. I love the Casino but I'm thinking of switching to a Fender Telecaster for the next one. All Fender all the time!

Occasionally. Even more occasionally I feel qualified to give it.

Respectfully toward each other and the people who work at the venue. Beyond that I think we're just happy when people come!

It's a pretty involved process that we've gradually ironed out. Basically I write half a song, or an idea for a song, and then me and Evan get together and he fixes it. Then we play it with a full band and demo it and me and Evan take the parts the band comes up with and kind of rewrite them with their input to better fit the overall idea we were going for. It's a lot of demoing and re-demoing and editing. A thing I kind of like about it is that we tinker for so long that by the end of it it's really hard for us to identify how any individual decision was made, which sort of makes it feel like the songs just came into existence rather than being things that we deliberately wrote.

Fortunately not, though I do forget the words sometimes.

There are too many and most of them are probably embarrassing or impossible, like my ineffable desire to one day become a pro wrestler. Short term and more realistically we want to make a full length album.

Oh shit! Try to remember that it's going to get better. All of the weird shit you feel are things that you feel really intensely right now, and while those feelings are valid there are other things and other places and you can go to find them if you get through this. I hope that isn't too totally cliched.

Probably doing dumb things as a teenager that I won't go into in greater detail on because it would upset my mother.

Honestly neither. For some reason being described as a musician has always made me really uncomfortable.