An Interview with Sondra Sun-Odeon 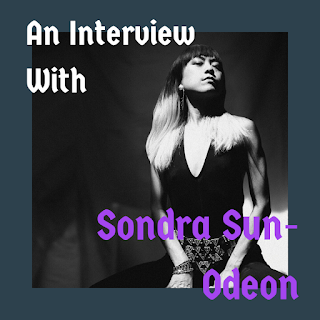 On her record 2019 record Desyre, Sondra Sun-Odeon created a tempestuous, textured collection of songs, reactions to painful personal experiences as well as more public frustrations ("Drowning Man: An Invocation for the Demise of Patriarchy" was inspired in no small part by the Kavanaugh hearings and appointment). Her mercurial voice dances alongside the album's wild, shape-shifting sonic landscapes, which tangle together to create beautiful depth and beautiful noise. Noise that Sun-Odeon herself, below, so perfectly calls "dark witchy haunted."

Sondra kicks off a brief tour this very evening at DC's Slash Run, a wonderfully intimate space in which to closely experience these powerful songs. In honor of her show tonight, Sondra's kindly answered the Beatles Q + A, which makes for a great way to get to know this impressive talent a bit better.

The debut of an hour-long performance piece called "Unsilencing" I created for the Hudson Basilica 24 Hour Drone festival.

Absolutely, if I don't think about it too much.

No, thankfully not. That would be very boring. I'm always excited to see the skyline of NYC, for example; there's something imposing to it that is at the same time very awe-inspiring to come back to. Physicality of a city determines the psyche of its residents. I'm in Los Angeles now and have a totally different experience returning here after travel; you navigate a vast expanse of freeways spread out over so much area.

Not trying to get any message across; I'm simply trying to express what's been on my mind the last few years with my new album Desyre.

A Fender 70's Stratocaster; a Fender Starcaster; a Goya 12-string custom baritone acoustic; a Goya nylon classical. I was very fond of my Gallanti guitars, but my first was stolen, and the second one I replaced it with got lost in a move.

With respect for all present.

In the past, they've come about very quickly in a burst of inspiration, of feeling. On this album (Desyre) however, the band recorded basic tracks for a couple songs without any vocals and I later wrote vocals and lyrics; I'd never written songs without having the vocal first, so it was interesting and "Drowning Man: An Invocation for the Demise of Patriarchy" came out well, I think. Going forward, I want to collaborate more on writing.

To tour Europe extensively. To live in a van, travel the country, and climb some very long routes outdoors. To live in an ashram for a while.

Trust your gut, your intuition, your inner voice.

Let's see...recently? Maybe shooting the video for "Desyre" Upstate with James Autery; one particular day in an abandoned underground mine where Dia Dynasty and I were in full costume--heels, wigs, with poor visibility and limited mobility, teetering on the edge of an open pit while two fires were set on either side of us, maybe? Ha. Even though I'm an amateur rockclimber, I still think the most dangerous thing I do on the daily is driving in Los Angeles.

I definitely think of myself as more a musician, and these days, more an artist who has worked in the medium of music.