An Interview with Ludovic Naud (Dead Horse One) 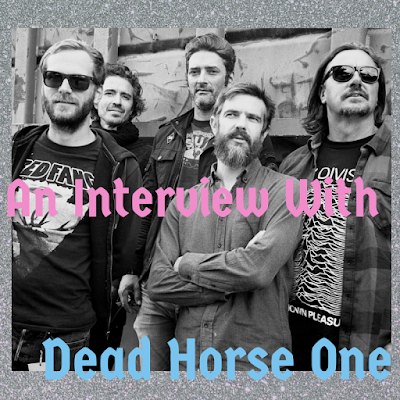 The cover of Dead Horse One's latest LP, The West is The Best, gives a good indication of the sounds you'll find on the record. Singer/songwriter Olivier Debard calls this “a collection of thwarted love songs in the spirit of Sparklehorse and other such 90s bands," and who am I to argue? I'd add that the album is a kind of mood music - a deep, dark, distant storm of a mood, songs that mingle well with the unrelenting, endless waves of the sea. There's mystery in these songs, as well as sensations of foreboding, sadness, contemplation, and something unfinished. The gray, tempestuous songs were mixed by Mark Gardener (RIDE) and produced by John Loring.

Bassist/vocalist Ludovic Naud took some time from basking in the glow of the band's latest record to give As to my Beatles Qs. Read on to find out more about Ludovic and his band (just don't ask him for advice!). Be sure to get better acquainted with the Dead Horse One catalog, too, I think you'll find doing so to be time well spent.

Unlike the years before, we didn’t get to play a lot of gigs with exciting bands like The Brian Jonestown Massacre or Nothing. So, the most exciting moment was a quiet one: the release of our last LP The West is the Best, with the Extra Limited vinyl edition sold out in 2 days only!

Every band member has their own taste in music. My favorite recording artists would be Elliott Smith, Sufjan Stevens, or more recently Big Thief, but the band all agrees to put Sparklehorse high above the rest. Every song is a dark poem filled with melancholy and harmony.

Sadly, yes. But fortunately, people are different. And most importantly, the food also is!

I would say “the emptiness of existence” or “the uselessness of popular culture”...

One of those zero gravity flights!

It’s getting harder to set new trends in music, but the blend of psych-rock, shoegaze, and grunge could be seen as a new trend.

Mostly bass guitar for me! And the other guys use guitars that have 50% more strings on them.

Yes, and my only advice is to not take advice from me.

Olivier (Debard) writes most of our songs. They’re about popular culture, music, movies, history…he usually knows exactly how they should sound and how to record them. The process with the whole band is to add up all the layers that make our sound.

“What is it like to be married with Scarlett Johansson?”

“Heavenly choir of jet engines.” It’s also the name of our first EP.

Not really, but some tunes are harder to remember than the others, especially the new ones. So, it takes a lot of concentration and it could look like a mental block-out!

None. Just livin’ the dream!

“Life is short, make every moment matter!” I guess that’s the only thing we think about when we grow old: all the time we wasted when we were teenagers…

Except for a snowboard accident in which I hurt my spine pretty hard, I never really hurt myself that much. I don’t live an adventurous life!

I definitely do not feel like a musician. I meet more talented musicians than me every day, so I can’t consider myself as one. But I hope I’m a good entertainer!