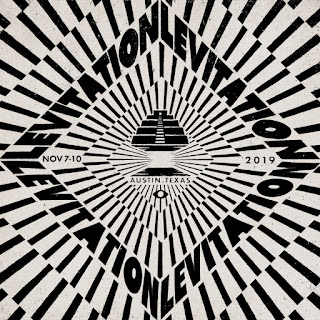 Yesterday was the start of a very special week indeed...LEVITATION WEEK. This Austin festival has grown by leaps and bounds over the past decade, and the 11th installment (November 7-10) promises to be a beast of the best kind.

What started off as Austin Psych Fest way back in 2008 has turned into Levitation, a multi-day sonic extravaganza full of some of the best (and loudest) psych/noise music around. Everyone from The Brian Jonestown Massacre to Primal Scream to The Zombies to Acid Mothers Temple (and so many more in between) has played this divine event, and this year's lineup looks equally epic. John Cale? The Flaming Lips? The Black Angels? BRONCHO? APTBS? And that's really just the tip of a very monumental iceberg. Pardon me while I swoon.

Yours truly is (finally) going to Austin this year to partake in my very first Levitation, and I'm so excited that I almost can't hide it. Hence, my decree that this very important week is to be known as Levitation Week. If you're not going this year, be sure you check out the bands on the dancecard. They're too good to miss (just take a gander at the official Levitation playlist below to see just what I mean).