An Interview with Hannah Findlay (Stonefield) 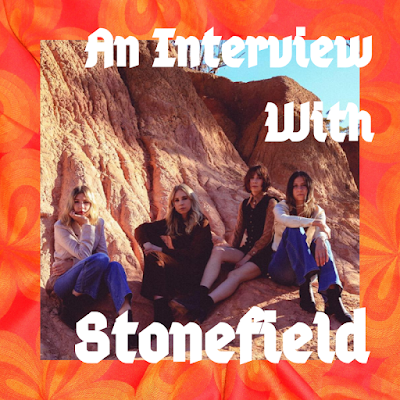 Stonefield's music is quite a thing to behold. This quartet of witchy Aussie women churns out song after song of big, bold psych/stoner rock (with hints of prog and pop lurking in the darkest nooks and crannies). Their towering, clouded crystal ball creations have an air of wizardry and black magic to them, and it's no surprise, then, that the ladies are on the roster at Flightless Records.

The band is this very evening kicking off their most recent US tour. Levitation-goers, make sure you check out Stonefield's Thursday night set at Barracuda AND/OR Friday night at Mohawk. DC, catch Stonefield on 11/12 at the Pie Shop. In the meantime, get to know the world of Stonefield a bit better, thanks to guitarist/vocalist Hannah Findlay.

Writing and releasing our album Bent. We’re extremely proud of this record. It’s been the easiest thing we’ve ever written and it poured out of us quickly, naturally, and passionately. It’s given us the opportunity to tour the most we’ve toured before and experience new and amazing places.

There are too many to name but a few favourites are Frank Zappa, Black Sabbath, Can, Janis Joplin, Aldous Harding, Uncle Acid.

Mostly! There are definitely moments where I feel a little nervous, for example when there’s intense turbulence or a bumpy landing...but I know that you’re probably safer in a plane than what you are in a car!

To be honest when we don’t have a lot of time in each city to fully immerse ourselves in the culture, they do become similar. We always try to see and experience as much as we can, but sometimes our experience of a city is a case of finding food and getting back to the venue.

There’s not one particular message we are trying to get across, however our last album was heavily focused on our experiences as women. As a band we don’t actively push our messages onto people, but hope that our music speaks for itself.

I’d love to see South America! I think it would be an amazing place to tour and experience.

I’d like to think we are, but we’re not...haha. I guess there seems to be a movement in our genre that a lot of bands are contributing to and it seems to be growing all the time. It feels pretty good to be involved in that and I hope that we can continue to put our own touch on the genre of music that we play.

I mainly use my custom shop 62 reissue SG.. however recently I’ve also been using an amazing hand-made guitar by Mark Nicol. It’s quite a different sound to my SG and a pretty wacky shape which makes it super fun to play.

Every now and then! We get asked for advice from people starting out in the music industry occasionally, and on a more personal level, my friends and I can always rely on each other to give advice when needed.

They generally stem from a riff or line that someone has. We jam on that until it evolves into a song. Amy tends to write most of the lyrics, however recently we’ve been a bit more involved, particularly Holly...she has a knack for coming up with a good line!

I feel like we’re often asked a broad range of questions but I suppose one thing no one has really asked is what keeps us doing what we’re doing. Which may be obvious but music is sometimes a really tough business that makes you question if it’s all worth it. It’s also one of the most powerful things in the world and the feeling of writing a song you’re extremely happy with or playing a great show is an irreplaceable, addictive feeling.

Too many times!! It’s one of the worst feelings...and there’s just nothing you can do about it but hope that it comes back to you ASAP. A lot of the time it’s in songs that we’ve played a million times which makes no sense and is super frustrating!

I guess as is the nature with most careers, I’d love to keep growing with the band and playing more shows in new places to new people.

Be confident in yourself and don’t think you have to do anything just because other people think that’s what you’re "meant" to do.

I wrote off my car a couple of years ago with my mum, Sarah, and Holly as passengers. It was a stormy night and a large tree fell across the road in front of us. We went flying in/over the tree but somehow were completely uninjured. It could have been so much worse, but somehow none of the branches went through the windscreen!

I think it’s a combination of both. We play a lot of gigs and I think essentially even if you’re not trying to be entertaining, when you’re in front of people playing music you’re providing entertainment. I don’t do anything extremely exciting onstage to ham up the entertainer side of it but it is very different to playing music in your bedroom.