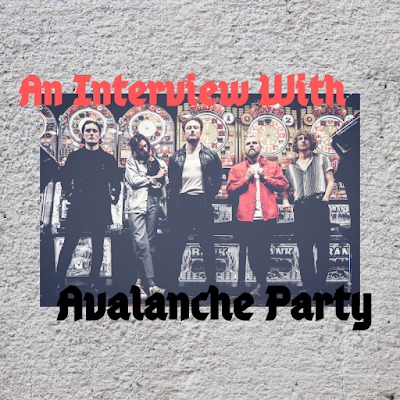 North Yorkshire's Avalanche Party is racking up critical praise here, there, and everywhere. In my humble opinion, these noisy rapscallions are well worth the hype. Latest single "Howl" is a bombastic, glammed-up sneer of a song, an irresistible nugget of epic proportions. And, as you'll see below, the video has a bit of a sense of humor.

The band is currently on the road in the UK, and is giving free passes to shows for employees of the NHS - Britain's National Health Service, which, like many important programs, is under threat from the current leadership.

Avalanche Party's treasure of an ivory tickler, Glen Adkins, gamely faced the gauntlet of Beatles questions, and did so in a way that I believe would make one J. Lennon proud. So, friends, put your feet up, put on some Avalanche Party, and get to know Glen and the band a little better.

There was a moment on a flight back from Los Angeles where we thought we were gonna get some food and then didn’t – and then did. That was pretty exciting.

At the minute – Mike Leander, David Lynch, Talking Heads… mainly Scott Walker. He’s got a song called "The Electrician" which is pretty David Lynch, and his voice in general suits the cold nights pretty well. I like "Farmer In The City" as well, because it was written about me.

No. Every landing and take off causes a deep mental process of considering and ultimately accepting death. It’s good for the mind. You know if that thing crashes you’re dead. Brace position isn’t doing shit. And they should save the plastic with those whistles, too.

South America or Russia. Probably Russia. In the bleak midwinter. I looked on Airbnb at places in Vorkuta and you can find whole houses for £10 a night. I think we’re gonna move there when we write album two. I think it’d be a good environment for making some really nice chillwave.

I think everyone will agree we have invented and are solely responsible for the new dawn of post modern music, bringing you the sounds of tomorrow, today.

A good friend of mine called Paul Ryder made the guitar I use, it’s a Strat thing. I like it because he’s put a fuzz pedal inside it. Other than that I don’t really care about guitars. We sound very amazing whatever we play. Jared plays a Rickenbacker, and is the exception which proves that rule.

Yes, all the time. I just have to say look – you can’t be me, but that’s no reason not to try and be the best version of yourself you can. Then we go through their financial history, relationship advice, DIY techniques. Message us on Instagram.

Tall people at the front, shortarses at the back. No talking apart from during quiet sections of songs. Mosh pits essential – especially if they annoy everyone else. If people hit the deck then kick them while they’re down.

I find a song I like and change the key, tempo and possibly two or three notes (not essential). Put some fuzz and delay on it until nobody can tell. Then write some lyrics about saving the world. Make sure they rhyme.

How do you do it so intensely, night after night?

I have never had a mental block-owt on stage, they only happen during written interv

I want to own my own llama farm, in the Pennines.

Don’t go to school and read a book or six.

I try and lead a cautious existence, but I did break my leg rock climbing once. I used to free climb, no ropes, straight up cliffs. Like that film, Free Solo. I blame a particularly cheap brand of chalk I was using but I fell a good 25 feet. Snapped the shin bone.

More of a song and dance man.