An Interview with The Eyyes 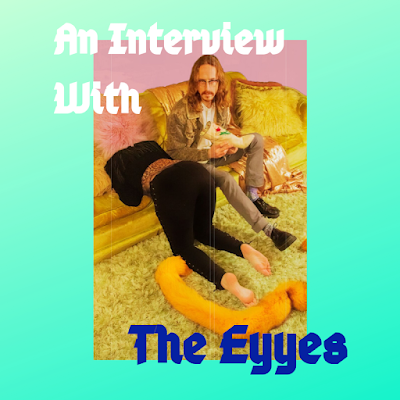 While they're rather new as a band, the duo behind The Eyyes is no stranger to making good psych noise. Dave Tourtellotte and Magdalene Herring were both members of The Fuzzy Crystals, and now record together as The Eyyes.

Their second single "Sunshiny Day," released just a few weeks ago, is a great soundtrack for our modern day Dystopia. The song has a surreal quality, a sort of slow motion stickiness that feels deceptively soothing. Coupled with slightly ghoulish keys and Magdalene's vocals that resemble a siren song, "Sunshiny Day" is a artful blend of the crush of modern lows with fantastical sonic escapism.

It's a strong statement of intent from this pair, now with Poor Man Records. Read on to get to know Magdalene and Dave a little better, and be sure to keep your watchful eye on this LA twosome. As an added bonus, you should most definitely check out the far out visuals for the song, directed by Steve Dukeheart.

Getting our 11th Spotify follower.

As long as there are no snakes on the plane.

If your eyyes are closed.

Be weird and have fun.

Deep into our mind so we can remedy the transgressions of our past lives - I hear it’s nice this time of year.

Yes, we want our listeners to know it's ok to sit at home and worry about the fate of the world while eating a piece of tear-soaked pizza.

Old, mid-shelf, and generic. I like Harmonies from the 6os-70s era.

Yes but I find people enjoy asking for advice a lot more than they actually take it.

No preference - take a nap, knit a sweater, work on your screen play, vape, you do you.

We get drunk on the fermented juices of our mind fruits.

Who let the dogs out?

Yes - every time we are on stage, thanks anxiety.

Truthfully, we want a goat farm filled with baby goats. Only baby goats though.

Break your phone and automatically ignore anything that comes from a Kardashian. Also, drink more water.

Shark attack last year while boating in the LA river.