An Interview with Driftwood Soldier 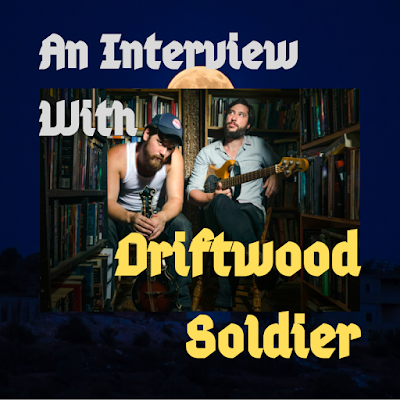 "Growl" isn't a genre I see too much of, it has to be said. It's also a fairly nebulous descriptor. But when it comes to Philly duo Driftwood Solider, that particular shoe most certainly fits. The Driftwood sound is a one-two punch of Owen Lyman-Schmidt's low, gruff rockfall of a voice (yes, you might could call it a growl) and mandolin and Bobby Szafranski's deftly-plucked bass, giving their songs an interesting contrast of seeming almost suspended in the amber of folksmiths long since gone while coming across as sharp, modern tales of modern struggles.

These gutter-folk makers recently released a new collection of songs, Stay Ahead of The Wolf, and the tour of said record brings them to DC's Pearl Street Warehouse this Sunday night (11/10). Get to know Bobby and Owen a little better before their visit to DC, and be sure you give their latest batch of songs some attention as you cast your eyes over some answers that are more than a little insightful.

Bobby Szafranski: Sitting in a Los Angeles studio, mixing Stay Ahead of the Wolf with Ted Hutt and Ryan Mall. There’s something really exciting about working with people that have such amazing proficiency in their art. I learned a lot and absolutely loved hearing what they did with our music.

Owen Lyman-Schmidt: Mine was a little earlier in the recording process. Listening to the friends who joined us on the album adding trumpet, drums, fiddle, harmonies and the like, it moved me in a way that came as a surprise. This isn’t my first time in the studio, by any stretch, but making me fall back in love with a song I wrote is just an enormous gift.

OLS: Nina Simone. Charles Mingus. If we’re talking still living? I love Charlie Parr. All of them
have a way of recording that leaves themselves in the music completely.

BS: The logical part of my brain knows that I’m safe in the plane, but if I think about it too much, I know that it’s just a very controlled fall in a massive machine that has probably had its check engine light on for the past month and is overdue for an oil change.

OLS: Planes are alright, but thinking about what that jet fuel is costing us all in carbon emissions takes the fun out of it for me.

BS: I wouldn’t say that. Every city has its own feel and energy, and the more you spend time with the locals and the closer you look, the more you realize how unique every place can be.

OLS: Not at all. Cities are like tattoos. Even if they weren’t always changing, you are, and your relationship to each place is going to evolve.

BS:“Follow the money” is my newest mantra. People with too much money to spend, spend it on political power. If you look at the people with money, you’ll see who’s pulling the strings and causing the world’s biggest problems.

OLS: “Everything is complicated.” If someone says otherwise, they’re probably trying to sell you something. I make music because it feels like the only way I know how to get people to care about nuanced stories.

OLS: Sorry about that. Bobby’s a smartass.

BS: Alaska before it melts.

OLS: Me too actually. Sounds like we should plan a tour to Alaska.

BS: I feel like we’re laying the groundwork for a new approach, but I don’t think other people have followed anything we’re doing yet.

OLS: Yeah. Plenty of people have told us that they haven’t heard music like this before, but I’m afraid that hasn’t made us trendy. Yet.

BS: My main instrument is a Music Man Sterling Bass. I always loved the ‘Music Man Growl’ and particularly love the tone I can get from the Sterling’s active preamp. I have a couple frankenbasses as backups. One is a Jazz bass with a p-bass pickup in the neck that I bought for our Ireland tour, and the other is my first bass, a Danelectro ‘59DC that I bought for $81 in a grocery store parking lot. I ripped the frets out, handwound new pickups, and equipped it with jazz bass inspired electronics.

OLS: I play two mandolins: a Michael Kelly F-style and a Gibson A-style from the 50’s. Both have after-market pickups. The Michael Kelly is a workhorse with a beautiful pickup on it, but it chews through strings. The Gibson is a more complicated animal. A couple decades ago somebody really tore it up in the process of installing a pickup they’d ripped out of a cheap electric guitar. I came across the thing in the back of a piano shop in Massachusetts where a luthier had been hired to fix up somebody’s dead uncle’s instrument collection for sale. We both agreed it was a wonderful instrument that no reasonable person would buy. I stopped in every tour to play it until the luthier decided I should keep it and offered me a price he knew I could afford.

OLS: At their own peril. I overthink things.

BS: I still find it a little weird to see people singing the words to our songs because I don’t even really know them. I think my favorite thing is the confusion in people’s eyes when they see us for the first time, trying to figure out where all the sound is coming from.

OLS: I think people singing along is kinda sweet. Stay Ahead of the Wolf is the first album where we’re publishing the lyrics along with the CD. In fact, it’s the first time I’ve ever written lyrics down at all, so when someone knows all those words to one of our songs, they must have taken a real liking to it.

BS: Owen can take this...he writes the lion’s share of each song and brings them to me as a fairly thought-out piece already. Then I put my spin on it and we arrange it together to get the dynamics right.

OLS: Usually I just start talking to myself. I get a bit of something, a phrase, and I dangle it out there as bait to catch a melody. If anything bites, I flesh that phrase out slowly until I understand the story behind it. Once I’ve got a melody, and I know the story I’m telling, it’s just an office job putting it all together until the pieces click. Then I bring it to Bobby, and we try to make it hop.

BS: What would you have done with your free time over the years if you never learned how to play / write music?

BS: Yes and it’s frightening. It’s very rare, but every now and then bass lines that have become muscle memory just totally elude me until I can find the start of the line or run. It’s no fun and the few times it’s happened I improvised until I got close enough and ended up reverse engineering the bass line I’d already written..

OLS: Never. If you see my eyes glaze over, and I start muttering off-mic, that’s just art. Performance art.

BS: I would love love love to create a film score. I had my first taste of that writing music for modern dance pieces in college and I’d love to do more of that as well.

OLS: Wrote a novel years ago. Should probably try to publish it at some point.

BS: Surround yourself with people you can make art with. And don’t be afraid to work with your hands if you’re not excited to be at a desk all day...the world needs tradespeople.

OLS: Don’t trust anyone over thirty, including us. We’ve lived in a bad world too long and our morals are compromised.

BS: There was one particular bike wreck that involved trolley tracks that could have ended things had I landed on my head instead of my shoulder. This was way back when I first started riding in the city, before I realized that helmets were important.

OLS: I don’t think all the relevant statute of limitations are up, so I can’t talk about this.

Do you think of yourself more as an entertainer or a musician, or do you think it's more
of a combination of the two?

BS: I’m some kind of combination, but if I’m honest, I’m more of a musician. When I’m on stage and notice my entertainer side is taking away from my musicianship, I tone it down to make sure I’m doing the song justice.

OLS: I don’t find the distinction terribly important. I grew up in DC, playing jazz and blues bass with Pepe Gonzalez. Pepe could teach a stone to bossa nova in C flat. Everything I ever learned about music was from him, and I’ve been scavenging off it ever since. But I had to live through many more years before I could start to make the best use of it as a songwriter and a performer. There’s a pejorative edge to just being an entertainer, as if it doesn’t value the art, but to me the real measure is what kind of effect it has on other human beings. If you call that entertainment, I’m an entertainer.

BS: I’ve had to listen to Owen play mandolin for years. He’s definitely more of an entertainer.