An Interview with Cameron AG 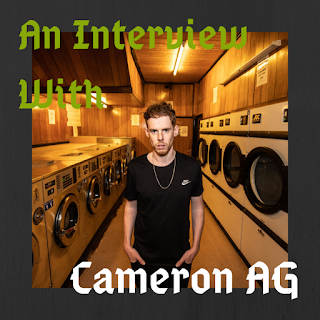 It's a busy time for Oxfordian Cameron AG. His debut LP One by One, three years in the making, was released Friday. "Lost Direction," one of the singles from said record, had its premiere as Annie Mac's "Hottest Record in The World" on Mac's BBC radio show. And, in honor of Movember, Cameron released a cover of "We're Going to Be Friends" (The White Stripes) as part of the Mo Sounds playlist initiative, his gossamer delicate treatment giving the original a run for its' money.

To get to know Cameron a little better, read on for his take on the FL Beatles Qs. And if you're into records that are "full of ups and downs" that feature "songs about love and hate, light and dark" with deeply penetrating, poignant lyrics (which I definitely am), you'll want to keep an eye on Cameron AG.

Getting new music out, I’ve been living with these songs for a while now and it feels great to get them out into the open. England winning the cricket World Cup was pretty exciting too.

Yeah never had a problem with it. Can’t ever get to sleep though. That British Airways flight filling with smoke the other day was a bit scary. Wouldn’t want to be on that plane.

No not really, they all have the same shops which is a bit weird but you can usually still get a good feel for a place if you spend enough time there.

I’ve never really set out to get a message across. Just want to make good music and hope some people enjoy it. There’s a message in most songs, whether it’s a worthwhile message that’s a different question. I guess you take what you want from songs, if it’s a good song then I might take a message from it. Has to be good though.

Not really. I try to find a different approach in how to present songs musically. That’s what every musicians’ trying to do though. Well, most of them.

I don’t think you can go about setting a new trend. That’s overthinking things. It probably just happens by accident. The Strokes did it. And I thank them for that, it was needed.

Whatever’s hanging on the wall in the studio usually. I’m not fussy. It’s mostly Fenders on the record I think. My friend Chris played guitar on a few tracks too, he’s really into guitars. I think he used a Jaguar for most of it.

From time to time. If it’s to do with music I usually say just keep writing and writing. That’s the best way to stop your brain overthinking things. Let the rest sort itself out.

Erm, not too bothered really. As long as they enjoy it. If they’re not enjoying it, go get a beer and I’m sorry.

If I get frustrated I haven’t written anything in a while it’s because I’m not doing it constantly. Songs feel like they’ve just dropped out the sky. They haven’t, it just takes hours and hours of going round in circles and then something happens. Like searching for your keys or something.

Liam or Noel? Actually I’ve been asked that before but it’s a good question.

Yep, I looked down at the piano and it didn’t make sense. Lots of people in the audience that night. Wasn’t fun.

Find your thing and do it. Ignore the haters. They’re only jealous.

Choked on some steak once, thought that was it.

Musician if either. The aim is for the music to entertain. You can run and jump around all you like but if the songs ain’t up to much what’s the point.