An Interview with Brian Willey (The Black Drumset) 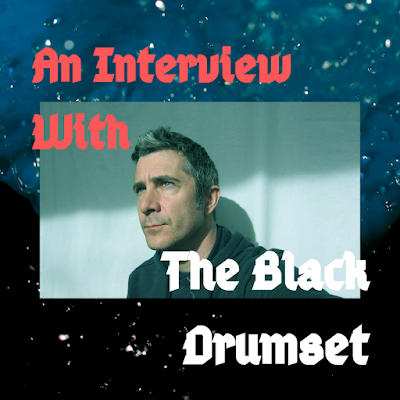 It's been about a decade since The Black Drumset first unleashed a record on the world, but this year saw Brian Willey's brainchild return with Charged, a record full of out-of-body experience noise. The shape-shifting songs crash and careen through time and space, waves of celestial chaos looming around every turn.

The Black Drumset is part of this year's Levitation, and if you're in Austin you can catch Willey and his live cohorts at Mohawk tonight. On a more immediate basis, get to know a little bit more about this captivating Austin project.

It's been a really exciting year with lots of great moments, but releasing the new album was the high point. I worked on that record for a looooooong time, so it was great to get it out into the world and get such a great response. Then when I got the new lineup together for live shows, we had a point after practicing for a month or so when I could hear it coming together and I thought, shit, this is really going to happen.

Some current faves are Emma Ruth Rundle, Abul Mogard, Bombino, Suuns, EERA, Morgan Delt... Kim Gordon's new record is great. There is so much fantastic music coming out right now, I am continually surprised and delighted. All-time favorites would have to include John Coltrane, The Stooges, Aretha Franklin, Radiohead.

I understand that I am very safe on a plane, statistically, but I do not feel particularly safe. I was on a plane once that had problems with the landing gear, totally weird and scary. There was this moment of absolute quiet and calm after we were told we’d be making an emergency landing - it is very hard to describe the…serenity (?) of that moment. No one was speaking or crying or making any noise whatsoever. I will never forget it.

No. I love visiting new cities and having that feeling of discovery and seeing with fresh eyes. I do guess though that cities seem to be getting more similar because of accelerated redevelopment.

I'm not trying to convey a message but rather a feeling of living in our current moment. One reviewer responded to the last record in a way that I really liked by saying the music "sounds like the genuine interaction people have when they are faced with the impending doom of something out of their control." The new record has dark and tense moments but I hope there is light and energy and determination coming through.

Australia is high on my list for travel destinations.

No. I aim to create music that has its own unique character and voice, and that pulls from various genres and traditions in an interesting way. I don't really think of it in terms of trends, maybe because it feels grounded in established traditions to me. I'd be more happy with it feeling timeless in some way, so long as it also sounds original and recognizable as itself.

A Puresalem Tomcat and a Gibson Flying V. There are some guitar parts in The Black Drumset, but my new side project that I have just started, Molten Kitten, will be ALL about guitars.

Happy and dancing is the best.

I write in the studio on my own, through the recording process. I do a fair amount of experimenting and when I get a beat or sound that I like, I start recording and adding parts on top and rearranging. It is usually a fairly slow process of building up and I often live with parts for a long time. Occasionally, I will complete a song in a few days, but that is rare. I would actually like to work faster on the next record, and maybe write in a collaborative way with the rest of the band. We'll see.

Where were you when you learned that Donald Trump was convicted?

Yes, I tend to be nervous until we've gotten through the first song in a set and then I settle in. I write down some main notes (synth settings, etc.) in case my mind goes blank for a moment.

Musically…I’d like to get a record label to start releasing my music. It is a lot to do by oneself and a good label would do a better job. I would like to play more international shows and festivals, and I'd love to have my music used for film. Outside of music…learning how to be less stressed and have more inner calm would be great, and I’m continuing to figure out how to be a more effective political citizen.

Take care of the people around you, and try not to think about yourself all the time.

I was in a motorcycle crash a few years ago - luck and proper gear saved me. I had this irrational feeling of invincibility after it and before I had even healed enough to ride again I bought a bigger, faster bike to replace the one I destroyed.

Both, but definitely a musician first, trying to become a better entertainer. I'm a bit introverted, but it is good to get outside of yourself and shows are obviously more enjoyable when the artist gets into it and interacts. And a good visual show (video, etc) can expand the experience of the music. We’ve done a bit with projections but I want to expand on that in the future.