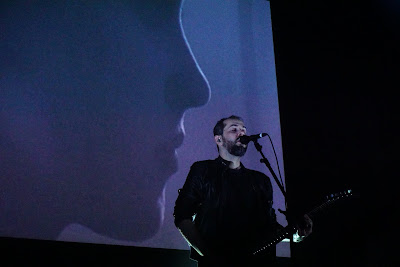 Live music connoisseur Ben Kirst has been to a show or two over the years and knows a thing or two about what makes for a good one. Read on for Ben's thoughts on Cigarettes After Sex's recent seduction of DC.

A small revelation from the sold-out Cigarettes After Sex show at the 9:30 Club on Friday night: songs about love, it seems, are usually about the problems of love. Longing, heartbreak, missed opportunities, not appreciating what you have until it’s gone, that sort of thing. The I’m-so-happy-to-be-in-love songs are out there, though usually on the pop side of the sonic spectrum, and the same artist who sings about the depth and breadth of love is usually also the first to discuss the devastation it can wreak. 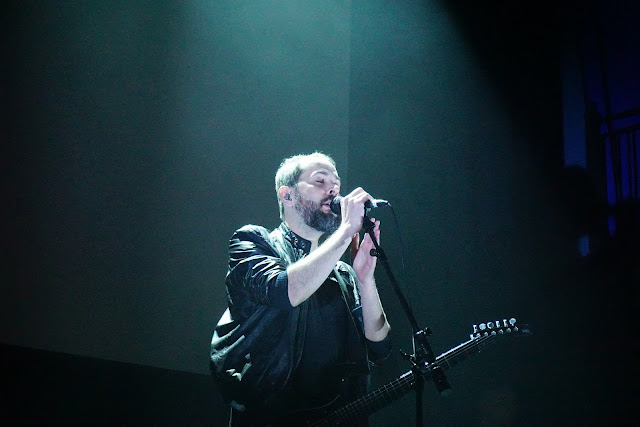 Greg Gonzalez, the singer/songwriter/guitarist and CEO of the dreamy softcore outfit Cigarettes After Sex, loves love. He loves the sex of it, the feelings it creates, the little cinematic moments in time it creates. That’s what a cigarette after sex is, when it comes down to it, right? — a chance to bask in the glow. Greg Gonzalez owns that glow. 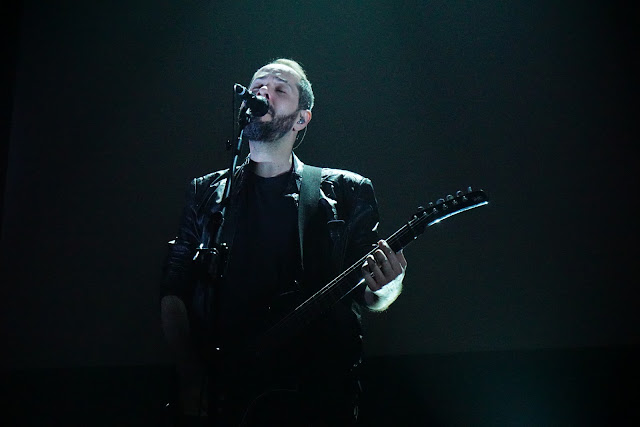 Which is interesting, because Gonzalez and Cigarettes After Sex, in terms of pure visual presentation, look like a very classy goth band. Black and white imagery, darkness and pure white stage lights, black and white art images like female portraits, lit matches, the roiling sea, etc. projected onstage, the jackets and boots of shiny shiny leather — you’d expect Joy Division, and instead you get the xx if Jamie Smith wrote all of his songs immediately after getting laid.

Gonzalez once remarked that his visual aesthetic is influenced by the work of Mark Rothko and The Smiths’ album covers, which is interesting because he’s stripped away the color of Rothko and the irony, or even camp, of those Smiths records in exchange for a kind of lusty keyhole vision of “Justify My Love” minimalism. 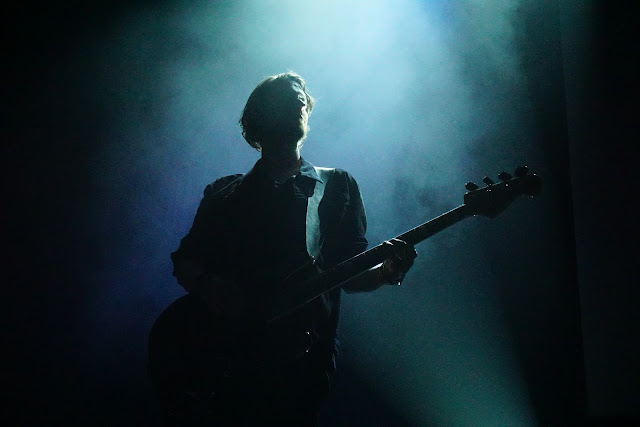 It’s working, though. Gonzalez and Cigarettes After Sex arrived in Washington, DC, to greet a capacity crowd on the same day their new album, Cry, was officially released through Partisan Records. The popular singles “Heavenly” and “Falling in Love” both appear on the new record, along with seven other new tracks.

The band opened with “Don’t Let Me Go,” the first track on Cry, and the eager masses responded with a roar when Gonzalez led bassist Randy Miller, drummer Jacob Tomsky, and keyboardist Phillip Tubbs into “Sweet,” from Cigarettes After Sex’s 2017 self-titled breakthrough album. “Sunsetz” and “Crush” got enthusiastic receptions, as did Gonzalez’s occasional, pensive foray from his set-back mic stand to solo gracefully near the lip on the stage. 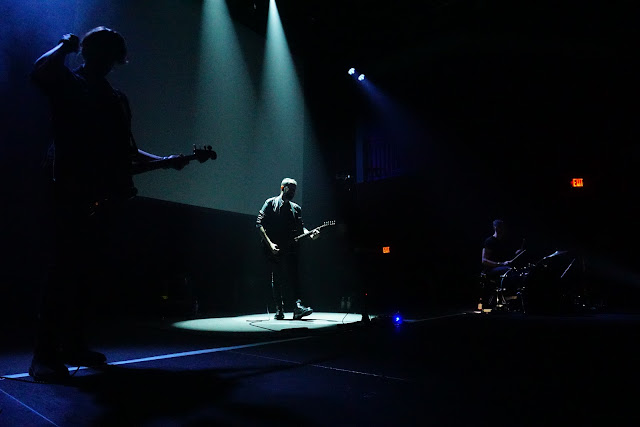 It’s hard to describe the atmosphere at the show. It wasn’t subdued, it wasn’t quiet. The crowd was definitely friendly and very enthusiastic about what they were seeing — but it also had a sense of calm, of appreciation. There was loud and sustained applause after “Falling in Love,” “Affection,” “Keep On Loving You” (a cover that’s better than the original), but it’s not like these people were losing their minds. They were respectful. They drank in moderation. They didn’t shove or push. They were enjoying themselves.

It was nice. The crowd even indulged Gonzalez’s short film, You’re The Only Good Thing In My Life, which was definitely...something. 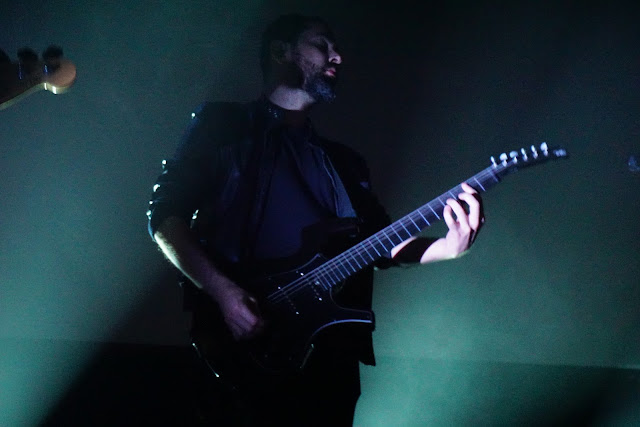 “The drummer must have the easiest job in the world,” a young woman next to me remarked at one point in the show, and she was right. Tomsky seemed limited to snare taps and high-hat brush strokes for most of the performance.

That’s what Cigarettes After Sex is all about, though! That’s ambient. Live, Gonzalez’s guitar work is interesting to absorb, you can start to pick out the influences — you definitely hear Robert Smith, you hear a little Martin Gore, you even pick up some David Gilmour. It cuts through the room. Gonzalez quotes his influences as obscure 1980s new wave acts like Cocteau Twins and Julee Cruz, and ambient electro artists like Aphex Twin, but you’re not fooling me, Greg, you had “Just Like Heaven” and “Shine On You Crazy Diamond” on the same mixtape at some point. 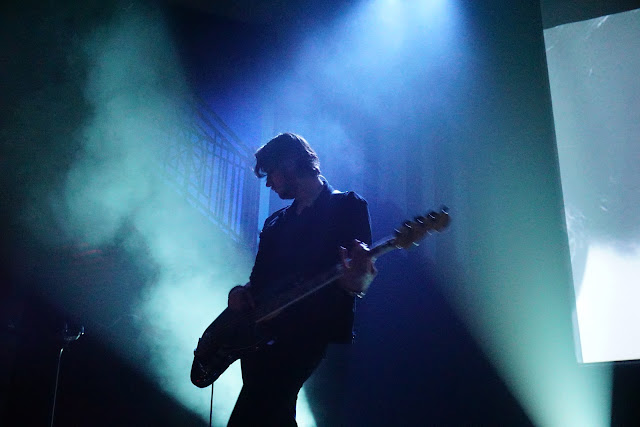 If I had one criticism of the show on Friday, it’s that it was a little too loud. Cigarettes After Sex is a hushed band, and when Miller’s bass thudded through the top of the mix, it felt like some of Gonzalez’s lyrics, a key component of the whole CAS experience, were lost. 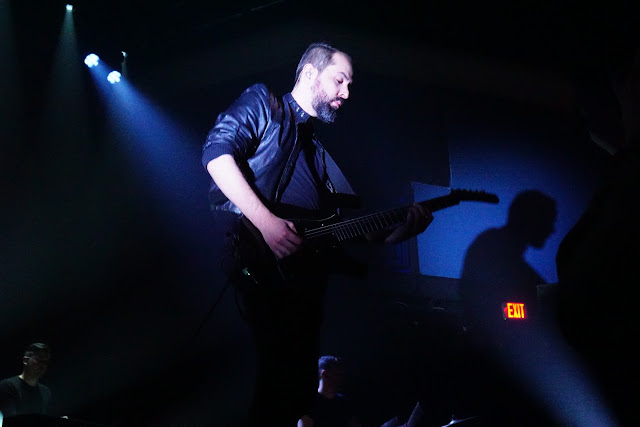 There was an encore — one song, from the new record — I missed what it was, to be honest. The woman next to me grumbled that “if you’re going to play an encore, make it something everyone knows.” Alas.

Regardless, the crowd was satiated, spent, and went home happy and warm, little knowing that the Washington Nationals would break their hearts over the next 24 hours with consecutive World Series losses at home.

I guess the thing to say these days is that Gonzalez and his fans are in their feelings (in fact, that’s exactly what Exclaim’s Alisha Mughal wrote last week). As our society redefines what makes a man a man — or debates if that’s even a concept worth exploring anymore – more power to the Greg Gonzalezes of the world, proud to embrace love and romance, open to the power of feelings, content to bask in the glow.


[words and photos of Cigarettes After Sex by Ben Kirst]