An Interview with Caustic Casanova 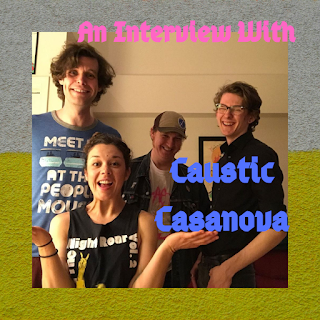 I've mentioned it already, but Caustic Casanova just released (as in, this very day) their latest LP, God How I Envy the Deaf. A noisy meander through muddy, murky morasses of genre-jumbling hard rock, this record holds nothing back. The DC band is celebrating this beast of an album by throwing a record release shindig at Atlas Brew Works, a party you should most certainly include in your weekend. Tomatoes optional.

Half of the newly-expanded foursome (Stefanie Zaenker, drums/vox and Andrew Yonki, guitar) dove right in and answered some Beatles-y Qs, which you can read below (ideally while also listening to God How I Envy the Deaf).

Stefanie Zaenker: Releasing our newest record God How I Envy The Deaf TODAY!

Andrew Yonki: I got engaged this year, so definitely that. Music-specific, I'd have to say that playing BuddyFest with some of my favorite modern DC-area hardcore bands was a blast. That was our last show where I was the only guitar player, and I feel like we knocked it out of the park.

SZ: I have so many but I'll mention three of my favorites still releasing new music regularly: Queens of the Stone Age, Melvins, Clutch.

SZ: Yes. I love them and I always order tomato juice as my complimentary drink.

AY: Mentally I do, but my knees do not.

SZ: No and yes. I find something unique about every city or region I'm in (ex - meat raffles in Minneapolis, garbage plates in Rochester), but yes in that each city has street lights, people with opposing political views, and gentrified neighborhoods.

SZ: If I ever get rich all I want is at least three hour-long deep tissue massages per week. Oh wait, did you say message? I need to put my glasses on...

AY: I don't always know what I'm doing, but I'm gonna have a blast doing it. Also, wearing shorts onstage is not a crime.

AY: Ireland, Belgium, Portugal, at least on vacation. To play shows? Oddly enough, this band has not played in New Jersey, and despite denying it for years, I grew up there, and it's a state with a deep musical heritage.

SZ: I think we are the opposite of trendy so, no.

AY: I've never heard anyone that aims to do what we do, so I'd guess not.

SZ: In tune ones.

AY: My white SG Standard is my pride and joy, I have a Guild S100 that I also love, and currently in the practice space, I have a Hamer Vector flying V copy, and a Schecter C1.

SZ: Throw a tomato directly at my nose and I'll know you're really paying attention.

SZ: Someone will come to the band with a riff or loose song and we flesh them out together in practices.

SZ: What a great question. Nobody has ever asked this question in our interviews. I'm not dying to tell the world anything but ask me something and I'll give you an honest answer.

AY: What hot sauce or beer would you pair with which Caustic Casanova songs. (Ed. note - under consideration.)

AY: I've toyed a lot with semantics and specifics in our sound, but let's cut the shit. We play heavy metal.

SZ: I feel like I'm a different person on stage, does that count?

SZ: I'd like to become an owl, or prove that a duck isn't a bird, someday.

SZ: Being a loser isn't cool. Be yourself at all costs - it will pay off eventually and the wait is worth it.

AY: Enough with the sweat pants in public.

SZ: The time I fell off of a roof and broke both of my wrists and tailbone. Ouch!

AY: Loading into Smith's Old Bar in Atlanta in a rain storm. Carrying 100lb cabs up a metal staircase at an 80 degree angle while being pounded with rain, barely having any purchase under your feet, and having to go under a busted gutter. One slip all that gear and SPLAT