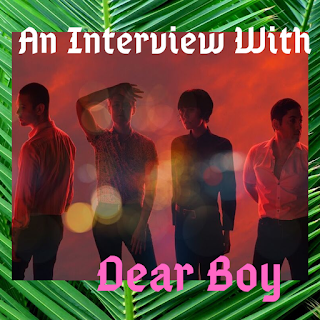 LA outfit Dear Boy occupies a sort of gloomily golden middle ground between the delirious, drizzly divinity of bands of the Glasgow School and bands of the 1980s glory days of the Flying Nun roster. But there's a decidedly California sunniness to the band's songs, adding an irrepressible incandescence to their jaunty, deceptively upbeat jangling. It's not at all difficult to imagine Dear Boy sharing stages with the likes of Psychedelic Furs and James, which they just so happen to have done earlier this year.

In addition to touring with a couple legendary bands, Dear Boy released the bittersweetly lush Strawberry EP this spring, and a standalone single, "Heaven Moves," followed. Busy bees, indeed. Get to know Dear Boy a little better by reading on to see what singer/guitarist Ben Grey makes of the Beatles-y Qs, and be sure to keep a close eye on these four.

Receiving a standing ovation at The Greek Theater…I’ll tear up again if I start thinking about it.

Incredibly…But I like knowing the pilot’s name for some reason.

Be kind. Be cool. To everybody. To yourself. Wear sunscreen. Learn another language. Fall in love. Cook often.

You know what? I actually do… It took me a long time to recognize that and lean into it, but yes. Hopefully you’ll be hearing a lot more bands cite The Housemartins as an influence in the coming months.

Fender is our axe of choice. But Austin has been known to play the field.

A lot! I don’t always feel qualified to give it, but I’m happy to get involved.

I definitely don’t want to tell our fans what to do. You’ll never see me asking for claps or anything like that. Artist/audience is a symbiotic relationship and it’s whatever you want it to be. But, hopefully whatever it is, it’s engaged.

A lot of wishing is involved.

I would really like someone to ask for my pie crust recipe.

Haha yes. A few times. It’s wild. I usually render out pretty quickly, but there have been a few times where I wonder what the hell I’m even doing up there.

Oh my gosh…there are many. I don’t know if this is a reality, but hopefully some form of TRL will come back and we can then go on it.

Don’t do anything that makes you uncomfortable. You know better than anybody else what’s right for you and you don’t have to make anybody else happy. "Fuck off" is a powerful and available tool.

I’ve been held at gunpoint 5 times. I don’t think I can pick a favorite.

That’s a penetrating question! I consider myself a songwriter and communicator first and foremost. Everything else is either a means to achieve or an extension of that discipline. Songs are everything to me.