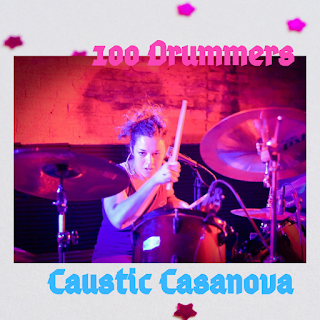 Long have I had a thing for drummers. Something about the way they sit, mysterious and enigmatic, behind their varying configurations of drums and cymbals, keeping time in a myriad of drummerly ways. Oftentimes, too, it seems that drummers are the background member of the band, garnering less press than perhaps their bandmates do. But these intrepid keepers of the beat need love, too. In this series I want to fix this egregious, yet probably accidental, oversight, and bring to your attention some of my favorite keepers of the beat. And so, inspired by a line in the Dylan classic “A Hard Rain’s Gonna Fall,” I present to you, friends, 100 Drummers.

DC's best purveyors of "progressive psychedelic sludge space punk," Caustic Casanova, today unleashed their latest LP, God How I Envy the Deaf, and will be celebrating their new record with a show tomorrow night at Atlas Brew Works. CC is calling this their favorite album to date, so expect a good time to be had by one and all. To get you in the mood, take a peek inside the mind of Caustic Casanova's drumming wiz, Stefanie Zaenker. Not only does she keep time in this sonic onslaught, but she also provides vocals on many of the band's exploratory rambles.

How old were you when you first picked up the drumsticks?

Probably 10. I think it was in sixth grade when I played snare drum in the marching band for the first time! I did marching percussion on and off throughout middle and high school. The first time I could ever claim to be a rock drummer was when I sat down as the drummer of Caustic Casanova for the first time way back in 2005!

Which drum is the best and why?

This questions is impossible to answer - all of them serve such a unique purpose and it's a constant goal of mine to perfect the technique for each piece of the drum kit. Not that I expect to ever perfect it, but it's something I think about and am constantly working towards. Lately I've been focusing a lot on hi-hat technique, though!

Who's your favorite drummer of all time?

I don't have a favorite drummer, but a few of my favorites are Max Roach, Dale Crover, Bill Bruford, Hozoji Matheson-Margullis, JP Gaster, Neil Peart, and Stewart Copeland.

Singing drummers: on the cool side like Levon Helm, or on the slightly questionable side? (Ed. note: obviously, the cool side!!)

Well, since I sing and play at the same time I'm gonna go with cool! Here's a better question for me: Traditional mic and stand or headset mic? I've always used a mic and stand and have contemplated getting a headset mic so I don't have to turn my head to one side to sing, but seeing other active drummers struggle with keeping it on has scared me off.

Say you break a stick during a show and you have no spares. What do you do?

Ha! Every drummer's live show nightmare. I'd keep the time with the kick and hi-hat until someone hands me a pair of sticks. Hopefully my laughing-yet-panicked face and vigorous sticking motions would clue people in that I need help.