An Interview With Matthew Evans (KEYS) 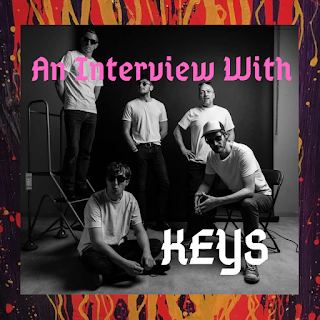 Sometimes it's possible to know everything you need to know about a band from just one of their songs. Judging from latest single, the frantic, five-alarm rock ferocity of "I Only Want You for Your Rock and Roll," Cardiff's KEYS is a band that's rather unapologetic about their proclivity to split eardrums and melt brains. But these sonic hellions have a softer side, rumor has it that frontman Matthew Evans wrote the song for his future missus.

Speaking of Evans, he sidled up to the Fuzzy Logic Beatles questions and had at it. Read on and get to know the man behind the smoke-on-the-water, pied piper vocals in this exciting Welsh outfit.

Signing up with Libertino Records.

I met Gruff (Head of Libertino) at the launch of Alex Dingley’s equally excellent and eccentric album Beat the Babble which came out last summer, and he was genuinely interested in what KEYS were up to. It just so happened we had an album looking for a home. He really understands the band, what we’re trying to do musically. Gruff is a lovely, lovely man – really old-skool in many ways: he gives you his time, and I think he brings out the best in all of us on the label.

There are so many wonderful sounding recording artists around right now. I think home recording has never been better. The masters for me are Ariel Pink, and John Maus; I’m completely blown away and befuddled by what they achieve in their productions. I’m also a great admirer of lo-fi house duo Paranoid London. Absolutely gorgeous, muddy lo-fi productions from them. Check out their single "The Boombox Affair," or their remix of Chemical Brothers' "Free Yourself." Stunning.

In terms of Guitar music, I keep coming back to Ty Segall – Davey (Boy Azooga) turned me onto him; and Tim Presley’s new album I Have to Feed Larry’s Hawk sounds like an Island Records lost Welsh Classic from the mid 70s!

I used to, but now I have children the takeoff is terrifying. Whenever we’ve taken plane rides we all hold hands during the takeoff. It’s funny how becoming a parent changes your perspective on things. Me and Gwion have always been unhealthily nihilistic – ironically it’s a deep bond we both have! But now we both have our own kids we’ve become more agnostic.

As my great and wise friend John Kift says, “Swansea Council have done more damage than the Luftwaffe!” I think there might be something in this as high streets become more and more homogeneous. Use other senses and every city becomes unique: The Scouse accent; the Brum (Birmingham) accent…

The same message as Viv Savage from Spinal Tap: “Have a good time, ALL the time!”

No. It’s never really been a goal of ours.

Hollow ones that feedback a lot. Thick sounds, not thin Fender tones.

I’m a teacher so yes, a lot. It’s an incredibly demanding job – it only works when you put 100% into it so it can leave you utterly exhausted.

Fans? I’ll never get over the fact that people come out to watch us play. They can act whatever way they like. There’s too much formality in modern living as it is. When you come watch KEYS play, you can let go of all that shit and put your fucking hands up!

So many ways. For instance, a title is an efficient way to start. A good title will have an inherent rhythm to it. Like "Pussyfooting," the opener to the new album (Bring Me the Head of Jerry Garcia, release December 2019). The phonetic stress is on "Pussy" not on "Footing." So that implies a swinging rhythm. Once you have a title and a rhythm you’re about halfway there: Just melody and lyric to go then. I love working with rhymes, too. Trying to avoid “moon in June,” finding less obvious rhymes can help create a sense of the weird. I’m with Dylan Thomas on this one and think the sound of the word trumps the meaning.

Dumb. We always aspire for the dumb option.

No, but I had one live on radio once. Me and Davey were doing an acoustic turn for a daytime radio show and I just forgot the lyrics for a split second. I started singing in tongues. It was mad!

We’d love to play Green Man again. We played it, I think in its' second year. It was still a small festival then. We’d love to go back and do a good show now that we are so much better.

I’m dyspraxic, so when I was younger I was always falling off cliffs or bumping my head.

Bit of both. As I said, it blows me away people paying their hard-earned cash to come out and see us. We have a responsibility to give them a good evening. I didn’t used to think like this, but more recently it's dawned on me. These are tough times, people need to lose their shit for an hour. It's healthy.