An Interview With A.J. Haynes (Seratones) 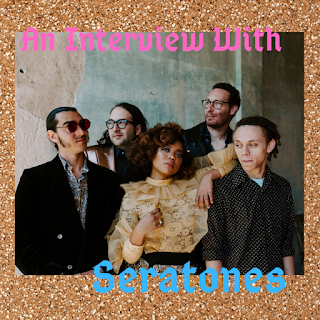 It's hard to listen to Louisianans Seratones and not be bowled over by A.J. Haynes and her smoky, powerful voice. Simmering and smoldering, her timeless tones hint at her gospel training in lyrics and notes fraught with feels.

Haynes and her compatriots are rolling into DC this weekend, stopping at the Pearl Street Warehouse. Don't miss out on this chance to see these Shreveport soulmakers in person. Before that, get to know Haynes a little better below, and be sure to check out their latest record, POWER, out now on New West.

That’s tough to say. I think just releasing Power into the world was the real moment of excitement for me. The past two years have been really challenging, both on a personal and a creative level (I suppose there’s not that much different...as this is a really personal album). My favorite moment for any apex or benchmark is the feeling that a job has been well done. It’s the moment in the studio after we’ve loaded out our gear and I’m bone-tired and the engineer is ready for us to get out of their hair. The air shifts, the lightning has struck, and there’s a certain peace knowing I did all I could. Obviously, being on CBS was amazing! And there were so many publications that I’m still reeling from. But the actual album is the point of most excitement for me.

Statistically speaking, airplane rides are definitely safer than the absurdly depressing rates of deaths/accidents of vehicular travel. Is it unnerving hopping into a metal contraption that flies through time and space? Abso-fucking-lutely. It’s less that I feel safe and more along the lines of accepting whatever fate has dealt.

First and foremost, travel is a privilege for which I’m eternally grateful. However, having the vantage point of a person in transit can be a bit overwhelming. Some skylines blur. And it is surreal to see the same symptoms of gentrification and cultures/people being displaced from city to city. So no, not every city looks the same. But some elements of cultural shifts absolutely do.

Where would you like to go that you haven’t gone yet?

Do you feel that you’re setting a new trend in music?

Toni Morrison said that if there is a book that hasn’t been written yet, that you must write it. I’m writing music that I’m excited about that doesn’t sound like anything else I’ve heard. If that’s a new trend, cool. If not, I’m happy about creating.

What kind of guitars do you use?

Yea...I’m not an optimist, so I don’t advise asking me for advice unless you want some real shit.

How do you prefer your fans to act at your concerts?