An Interview With Summer Cannibals 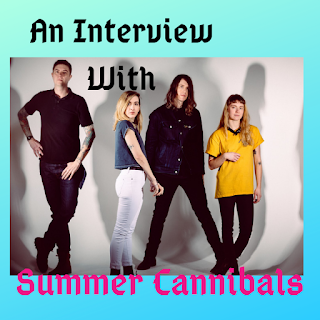 Portland's spiky foursome Summer Cannibals is about to roll through DC in support of latest record Can't Tell Me No. The bands sound is both defiant and inspiring, with paint stripping riffs and more shoutiness than you know what to do with. It's a riotous, take-no-shit kind of rock and roll in all its unruly, unapologetic glory.

Before tomorrow night's show at Comet Ping Pong, why not to get to know the Cannibals a little bit better? In true egalitarian fashion, the band answered the Beatles questions by committee, giving you all sorts of insights. So scroll on and get better acquainted with Jessica, Cassi, Devon, and Ethan.

Jessica: We’ve been really lucky to play with and tour with some really incredible bands over the last year, so it feels kind of impossible narrow it down to one. But a big highlight was definitely touring with Cursive which was amazing and a total honor.

Ethan: Yes. It’s like a really expensive amusement park ride with a cool view. I love it.

J: Exclusively Fender Mustangs for this band. Love how light they are and easy to play and the tone is perfect.

J: The best shows are the shows where people are moving! We have the most fun when the crowd is letting lose and having fun. Dancing is dope. Singing is dope.

J: The band is moving into a more collaborative method of songwriting so we’re kinda still figuring out what that is gonna look like for us. But for the last 7 years or so of this band, writing usually starts with me writing a bass line and then recording some drums over it. From there I’ll start working on vocals/lyrics and then guitars generally will come last. After that I send the demo to the band and we’ll all start playing it and seeing where it evolves from there.

Cassi: Probably a tie between, “Did you have to work at being so funny or does it just come to you naturally?” or “Do you want to pet this dog?”

Devon: Actually yes. One year we were playing Treefort Fest is Boise, Idaho, and I ran into some old friends from Denver. We started drinking white wine at 3 PM and that lasted for 6 hours until I was throughly hammered. We had to play at 11 PM, I believe, so I went back to the hotel room to take a nap. That nap lasted for 2 hours until my alarm went off shocking me awake. I ran to the venue in a weird haze and during the first song I stopped after the first chorus because in my mind we had just played the entire song. My bandmates looked back at me so confused as I clicked off the next song.

C: Be kind to yourself! We’re all making it up but life is long and it’s not all gonna feel easy all the time. Do what you love, and keep going!

D: I’ve put a lot of thought into this exact question over the years, but mostly I just think of myself as a clown.