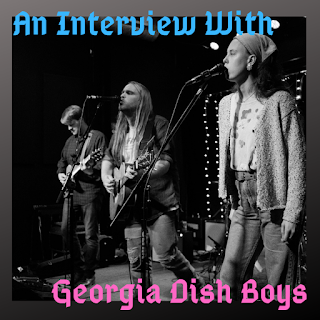 For their fourth record, Athens outfit Georgia Dish Boys went down the salt-of-the-earth, gritty Georgia back porch psych-folk path. Which is a pros pos, really, as latest LP Good Country Livin was recorded live on an actual back porch. It's a plainspoken, pure grain look at life through everyday eyes, eyes that have seen enough to be jaded but still believe in bigger and better things.

Main mouthpiece/songwriter Seth Martin tried his hand at the Beatles questions, scroll on for his answers. Martin's distinctive, rasping vocals add to the authenticity of the songs in no small part. Be sure to keep an eye on Seth and co., hopefully there's plenty more coming from the GDB in the very near future.

Releasing the most recent album. From recording at home to playing the release show, to the tour. It sure has been a lot of fun.

Not really. I don’t feel unsafe, but safe isn’t the best word for it. It feels like it could all go very wrong very fast. I always had a bunch of connecting flights, so I could get the cheapest ticket when I worked in Alaska and got used to the uncertainty of it. Like, I guess you just get accustomed to the fact that if one tiny thing went wrong everyone could die. I really don’t know. I do like the take off sensation of weightlessness that happens, though.

By the interstate and the airport they do. That’s where we usually stay because it’s where the cheapest motels and cheapest gas stations are. I mean, the dirt and the grass and trees and the sky look different everywhere, but when it’s all just concrete and green exit signs, it gets hard to tell things apart. Thankfully, most every town has its own feel once you get into it and off the highway.

Not trying to get any message across. I guess if you do feel something, I’d hope it’d be to love each other and work hard at what you are passionate about and see what happens. I can’t say that’s what it even is, but that’d be nice.

This has been one of the toughest questions. There’s so many places to go. I’d like to get into another dimension, ya know? We can see everything on Earth without going there due to technology and I’m not trying to say that’s as good as being there, but we kind of know what’s it’s like.

No, people have been playing gitars forever and they always will be!

I play an Eastman acoustic gitar and our electric player, Rob, plays a Gibson L6-S.

Of course. Regretfully, I don’t always follow it, but it’s always a learning experience.

I don’t care how folks act at our shows. I want people to be respectful of each other and have a good time and that’s about it.

It happens a lot of different ways. Lyrics are almost always first. The lyric will have a melody naturally attached to it. Eventually, the chords that match it will come out on gitar. Then I’ll take it to the band and from there it becomes what it wants to.

“What did you eat for lunch?”

That doesn’t matter to me. I try not to describe our music as much as possible and let folks make their own view of it. I know that every album is different, so I can’t put my finger on it. I just want to keep moving forward. When people push me for it I say, “songwriting rock?”

There’s been times when the right lyrics just won't come out. It doesn’t happen as much anymore, but when it does, I’ll try to make something up on the spot. Sometimes it sticks and sometimes it doesn’t. We’ve got songs on albums that are a result of that. I’ll do it sometimes just for fun or to see how the band will react and more often than not it somehow lands.

I don’t know that I have any ambitions. At least, not in the traditional sense. I do want to make a new album and play over a hundred shows each year for the next good while.

Tyler Key (amazing songwriter and pedal steeler) and I did a three month tour during the winter and there was a snow storm in the Sierra Nevadas that nearly killed us. The news the morning after reported a ten foot blizzard in the area we travelled through. We drove in it for eight solid hours. The windshield wipers busted and we both were snow blind from driving for so long. We saw so many cars wrecked along the way. I still don’t know how we made it. It took thirty minutes for my hands to stop shaking when we got to the motel.

I see myself as someone who plays music. I don’t like the term musician. It sounds very other to me. Entertainment is part of music, so it's kind of a given that someone who plays music is also an entertainer, I guess. That doesn’t mean they have to be in an elaborate get-up or on a stage to do it. Some of the best entertainers of all time are folks who never stepped foot on a bandstand. But, all I know, is that I don’t.