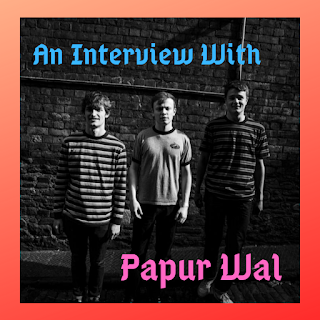 On their latest release, double A-side single "O'n Ni'n Ffrindia"/"When He's Gone," Welsh slackpoppers Papur Wal ("wallpaper" in Welsh, since you were wondering) tackle themes of loss in their gleefully scuzzed-up way. Both sides are plenty appealing; "O'n Ni'n Ffrindia" is a frolicsome, fuzzy affair, a reflection in part on personal loss, while "When He's Gone" is a gritty,  Malkmus-esque contemplation on "the decline of heroes and individuals."

Papur Wal's Ianto Gruffydd (vocals/guitar) gamely took on the Beatles question challenge; read on for a look into the world of this delightful trio. And for heaven's sake, someone book them a gig in Glasgow already.

Getting a BBC Radio 6 play off Marc Riley, one of our favourite DJs.

Absolutely not, we have a song about that funnily enough.

We used to say: to write songs that have meaning and messages behind them, sometimes we feel maybe some bands don't do that, but maybe our new stuff which we're demoing now is going away from that.

Fender Telecaster and Fender DuoSonic, I'd like to buy a Gibson Les Paul Tribute next.

Don't think so, I would be rather worried if they did.

Wet, wild and standing right in front of us.

Our songs are quite melody-centric if that's a word, but it varies. Sometimes I'll sit down and play the guitar and figure out a progression, other time's I'll have an idea in my head for the melody or for a guitar lick or something.

We used to call it slacker rock because it was inspired by American slacker bands mostly, but now we're really into 70s rock, specifically power pop. So maybe you could call it slacker power pop?

Yes, too many to count.

Make and release an album. Which we plan on doing next, we have started demoing it.

I have only recently passed my driving test, at the ripe old age of 22, and I nearly killed myself and Guto our drummer the other day trying to overtake someone on the A470 driving back home to North Wales. I'm quite a bad driver.

As we're relatively new, we didn't really thin about the entertainment side of things that much before, but we're beginning to understand that a little bit more. We like to entertain, and play music but I don't think we'd really call ourselves entertainers or musicians. Maybe one day we will.