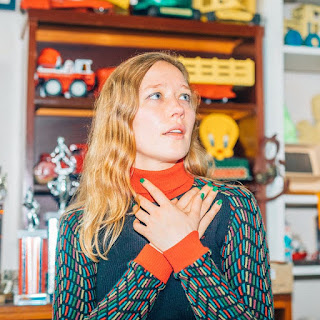 "We have no system in place for when this happens. Absolutely none." Four songs in to her set at DC's Rock & Roll Hotel, bemused and somewhat sheepish, Julia Jacklin apologized to the packed house for that all-too-common concert nuisance: the broken guitar string. But not even the pesky string and subsequent, requisite awkward banter could keep Jacklin and her band of Canadian gents from putting on one of the shows of the season. After all, as she jokingly proclaimed during the string repair, "Don't worry, guys, we're a bunch of pros up here." And she's not wrong about that.

From the first song, the heady and meltingly beautiful "Body," it was clear this was going to be a special night. Pulling heavily from her new (excellent) record Crushing, Jacklin captivated the sold out crowd with song after song of poignant, intimate sounds.

After the one-two punch of "Body" and "Eastwick," Jacklin said her hello to the assembled. "Hello, America. Nice to see you. We're going to play you some songs. I hope you like them." It was an almost shy introduction from a woman who has one of the strongest vocal talents around, as she proved time and time again, all night long. She even returned to the song that had led to the broken string, the haunting heartbreaker "Don't Know How to Keep Loving You." Her persistence was appreciated, as that was one of the standouts on the night. Though, in fairness, every song was a standout.

Guitar strings aside, and really that can and has happened to everyone, Julia Jacklin didn't put a note wrong. Her voice, which expresses so much on record, was somehow even more powerful in person. All the mournful, pleading, searching feelings that fill her songs came through acutely. The set (minus the solo Julia encore of "Comfort") came to a close with the irrepressible bounce of "Pressure to Party," and it felt like a moment of giddy release for everyone within the walls of the club.

Vocal talents like this are rare. I can't encourage you enough to make sure you support this one (and all the music you love) in person, so that talented artists like Julia Jacklin can keep making music for us to love.