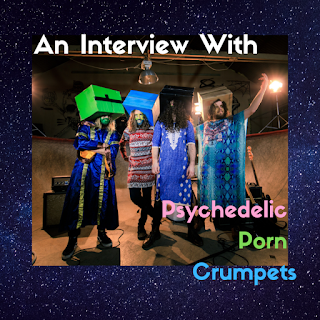 In honor of their show at Pearl Street Warehouse tonight (w/ Frankie & The Witch Fingers), here's a look inside the inner workings of the Crumpetian braintrust courtesy front Crumpet Jack McEwan. Dig in, and if you're in town go see these dudes make magic this evening.

Touring Europe. The whole trip was just laughs from the moment we landed to when we're holding each other's heads up for passport scans to get back into the U.K. It was all so surreal, leaving Australia for the first time as a band and getting the response we did. It really felt like you were living someone else's life for a while.

Unknown Mortal Orchestra, Deerhunter, Tame Impala, Mild High Club, The Beatles. Hundreds of others but I find myself going back to these 5 more than anyone else. They've got their own flavour.

I did 'till i read about a lady in India whose window popped out and she got barotrauma, which is when all the blood vessels in your face explode from the sudden change in pressure and your eyes fly out your head. Soooooooo brutal. Sorry for anyone reading this that has now contracted this fear. Or for you morbid ones, put that in your book, Chuck Palahniuk.

Not at all. It does if you compare Manchester to Tatooine I suppose but those little nuances like accent, the smell of street food and architecture make a place. In Australia we've got used to the major cities now, there's nothing older than 2009 years really, Launceston is amazing, but that excitement of arriving in Melbourne or Sydney now has died off a little as you know what to expect. But heading over to Europe we're all like dogs hanging our heads out the window looking for castles.

I dunno, I've never really been a pusher of anything, there's definitely things I'd stand up for but sometimes you just want music to flow. Most of our songs are about life as everyone can relate to that, why we're here, what the f**k's happening, not anything religious just an intrigued person trying to work out the world, that kinda thing.

Canada, or somewhere cold and mountainous. I really don't like the heat. Perth is literally 42* C while I'm typing this, I'm inside in board shorts, no shirt, hair tied up, if you spend 30 minutes in the sun then you're on an IV drip for 3 days after.

Not at all, I did when I was younger and had that cocky kinda approach cause I suppose that ego is what drives you through your teen years. But now I'm just in awe of what people can create. Like music is all forms, we just happen to write structured melodies with instruments, percussion and vocals, they meander from one place to another and I enjoy creating them, but imagine showing that to Dicky Wagner, or some avant-garde contemporary, they'd say it's basic. It's all perspective. I'd love to find my own sound eventually and create something unique but I need a few more years with the aliens first.

Fender Jazzmaster. Rish (Guitarist) played a Rickenbacker copy for a while but he snapped that in Newcastle (R.I.P), now he's got a chunky boy.

I have a couple of times but I'm still learning myself, it's hard to give an answer when you know you're also a student. Once you stop learning you instantly become ignorant of what other people are creating and become one of those 'old music was better' folks. Tell that to Flying Lotus, or Hiatus Kaiyote, or Mars Volta. Music is becoming so much more interesting, just gotta keep up with the curve and then try to add your part to it.

They can do whatever they want if they're having fun and respectful of others. Some people enjoy it by swinging their heads round wildly, or going for a crowd surf, some like going for a journey and listening deeper. I've been through all stages of interaction, kicked off a couple of stages that weren't mine but as long as your'e respectful then express yourself however you want.

Always guitar first, I try to get at least 3-4 ideas down before I start recording, like an intro and a few transitions. Then I'll spend a good few days working out 4 or 5 variations of where to take those parts and then once it's musically working will texture it with vocals. Then we swap out my Midi drums for Danny (Drummer) in the studio and then tighten everything up around the new drums. Then I'll work with Jelly (Mixer) for a few days on each track and try build a flavour for the album. It takes a while and I'm sure this is the strangest, DIY, self taught method that most people face palm over but it's working, and we're always tweaking the process. Every album's been a little different but I feel like we're all learning more each track that we're slowly narrowing in on the sound we're after.

Write me a 1000 word essay on your prediction of where music will end up in 100 years.

Yeah, only when I start thinking "Did I already sing this verse" or "What Chorus was that?" I play way better when it flows, sometimes I'm like wow, we've only got one song left, and time just spat out 50 minutes but your brain's been on for like 4 of them.

Play Glastonbury, become a movie director, learn astrophysics, invent a free renewable energy source, drink Guinness by a fire in a little old pub in country Wales with my sheepdog and join the local darts league.

Create as much music as possible, don't commit yourself to one genre, learn to record yourself and learn as many instruments as possible. Don't compare yourself to any other artists abilities and go at your own pace. Life's long, the more experiences you make the more you'll have to write about. Take inspiration from movies, paintings, plays, history, interesting people and never stop learning.

Probably last weekend's escapades. Fringe Festival is on in Perth so you get major FOMO each night and want to drink with everyone. Couple of 4 AM finishes later and I'm researching Hinduism.

It's definitely a combination, musician sounds better but I'm barely at the point to call myself either. There's leagues and leagues above me before I deserve a title. I reckon I'm just lucky to create music and then perform it. Kinda like a writer/actor, or a gambling sportsman.