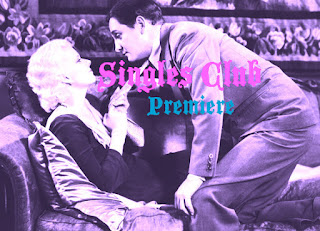 The local twosome's new single, "Me Dystopia," premiering right here and right now, is the title track from the forthcoming Me: Dystopia, an ambitious bilingual (English/Spanish) affair that brings together a sophisticated sort of kaleidoscopic sonic hodgepodge. It's a captivating sound that's representative both of the band's genesis, Loi Loi coming to life while Kristie was traveling with world with the Peace Corps, as well as nodding to their current homebase - after all, the ever-expanding District these days is nothing if not multi-national. Kristie and Ron manage to tap into the high-strung, intense energy of this city and harness it into something dynamic, sharp, and relevant.

The song has an initial creeping grittiness to the synths and vocal distortions that evolve into grinding, almost Eno-esque angles and machinations. Metallic kisses of industrial edges lurk in the shadows while Kristie's vocals both spin sugar and bare teeth, sometimes at the same time, all the while undulating cascades of synths crash from towering heights. If the song has a feeling of catharsis to it, that's no mere coincidence. It's an ambitious, colorful tribute to going through darkness and making it out on the other side.

"'Me Dystopia' is the title track of this album," Kristie begins. "The lyric, 'I'm lucky to say I was a victim of this life' describes seemingly insurmountable hardships that, at the time, I barely was able to move past - but somehow, I did. I believe there are many victims out there that can resonate with this; when all is said and done, being subjected to trauma is wrong, but isn't it amazing to survive it - when not everyone does/can? And how wonderful and random it is to be the recipient of that luck, which cannot be ascribed to anything, rather than run in circles of indebtedness? 'Me Dystopia' also tracks a warped and broken-brick path which, for me, arrived at a peaceful conclusion; I may have shattered seemingly enviable outcomes along the way by my own hand, but I got to freely make those choices and they did not ruin me. I feel nervous glee to be able to finally admit that's how I feel about life."

Keep an eye out for Me: Dystopia, due out in January on BLIGHT.Records, and be ready to hear much more about Loi Loi in the very near future.