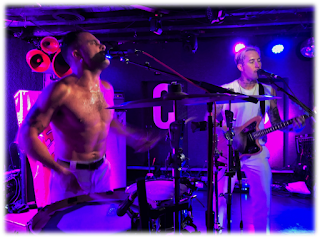 Intrepid Fuzzy Logic Intern Andrew is constantly in search of good live sounds, and the following is what transpired when he took in Slaves at DC9.

The headliners were just finishing soundcheck and already the venue was quaking in its foundations. I walked through the doors of DC9 eagerly anticipating the return of the UK’s premier punk duo, Slaves. It had been a year since I'd seen them make their triumphant debut in DC for their first ever US headline tour after hearing about their visceral, sweaty, and intense live shows, along with the incredible response to their appearances at Reading & Leeds, Glastonbury, etc. Brash and cheeky matched with a signature style of primal and pragmatic punk gives them an explosiveness best described as being hit in the head with a falling ACME branded anvil.

In support of their third full-length album, Acts of Fear & Love, the lads from Kent made sure to deliver their combustible energy and savage tones to the intimate hall.

Established members of the thriving British indie scene; Isaac Holman and Laurie Vincent have managed to expertly walk the tightrope of being straight to the point and unapologetically political without taking themselves too seriously or be unafraid to have a laugh. It's an ethos that has certainly resonated with their fans, and they showcase those values on their latest album along with their development and maturity as musicians and as people.

As DC9 buzzed with excitement, I couldn’t help but smile at the sight of a young fan by the name of Ryan who stood near me at the front. It was his first show and he traveled with his older brother Kevin from Philadelphia, taking advantage of the beauty of the show's all-ages designation. He was clearly ecstatic to see the mayhem Slaves were about to deliver with his brother. I could see Ryan dashing for the restroom, only for him to return wearing an amazing costume to pay tribute to the duo's cartoonishly chaotic track, “Feed the Mantaray.” 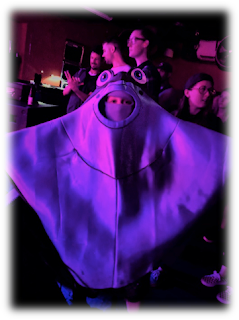 Behind a wonderfully positive atmosphere, Slaves funneled through the crowd making their entrance as if they were on their way to a heavyweight title bout, with Holman howling at the moon and bashing away at his practical drum kit while Vincent, armed with his custom Fender Jaguar and monolith of an amplifier, was ready to blow us away into oblivion.

Dictating their usual fast pace with anthems “Sockets” and “Cheer Up London,” Slaves tore DC9 apart with newer tracks like ”Bugs,” their latest single “Magnolia,” and dedicated the aforementioned “Feed the Mantaray” to the youngest fan in the house. Laurie’s beefy distortion and Isaac’s colossal rage in his vocals and drum kit bounced off the walls as they stood on top of the bar with the crowd relishing their display of the expert craft of disrupting an environment and violently shaking up a crowd.

Inclusion always being a key attribute during Slaves’s live shows, they made sure everyone joined in on the fun. Holman at one point asked the crowd to look around and hug their nearest neighbor to continue the motifs expressed on their latest album of lightheartedness and tenderness during the darkest of times. Exhausted from pouring their endless energy into the show, Isaac only had a few moments after each tune to douse himself with water like a raging inferno before hollering once more alongside Laurie’s heavy and saturated riffs. Closing the show with signature tracks ”Beauty Quest” and “The Hunter,” Slaves gave the crowd everything to earn a grateful and sweaty applause filled with the soaking wet satisfaction of destroying a city to pieces. 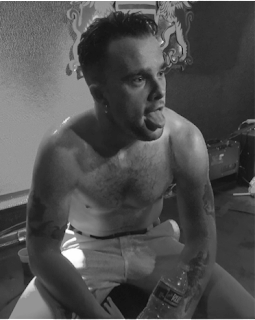 Incredible showmen with hearts of gold, the lads left DC making sure everyone got their chance for a quick chat and a photo opportunity. With Acts of Fear & Love, Slaves has certainly returned to form and will no doubt continue to bring their raucous energy to greater American crowds in the near future.


[words and photos of Slaves by Andrew JW Koh]