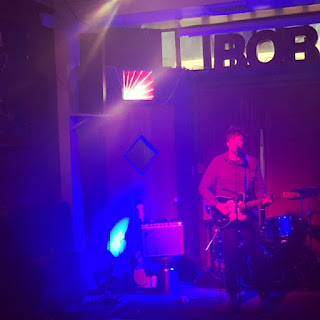 Lest you think The Natvral is Kip Berman's side project, that's most assuredly not the case. As Berman made clear during his set at Adams Morgan venue Songbyrd, The Natvral is "a band that happens to be one person." And as Berman demonstrated, one person is really all it takes.

The night he was in town happened to be Kip's birthday, so a celebratory sentiment was in the room. It was the perfect atmosphere in which to take in his lovely new sounds.

That Berman can play such tender songs (like single "Know Me More") wasn't a surprise, after all, there's plenty of sweetness in The Pains of Being Pure at Heart's music, under all the gleeful fuzz. But something about his songs as The Natvral felt even more personal and poignant. I'm sure that can be partially ascribed to the purity of form that comes from being in a room with a man and his guitar. It also stems, of course, from the fact that these songs are near and dear to Berman's heart, are as the experiences that inspired them.

Berman was as affable and charming as ever. Instead of holding court with a crush of TPOBPAH fans, he seemed nervously excited playing at Songbyrd, as though he was debuting his songs to a group of close friends. The attentive and respectful crowd hung on every note, as Berman unleashed his troubadourian side (with the occasional jolt of a good, old-fashioned rock out). Set closing song "Home" took my breath away, with Berman's voice hewn rough with emotion as he strummed with building fervor. The man is truly a storyteller and mood-setter, and each song's unique character was enchanting.

Quote of the night: "That's all I want for my birthday - an abnormally large slice of pizza."