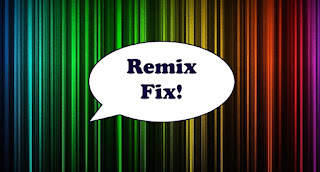 In theory I like the idea of the remix: taking someone else's song and tweaking it the way you want it done. It's a great means for completely redoing something, and for reinterpretation. Sometimes remixes go awry, and sometimes they're better than the original. Remix Fix is all about the happy medium when a remix totally nails it and makes a song that much better.

The former are releasing a record full of remixes of songs from their latest record Pinned, suitably called Re-Pinned. The record isn't out until October, but this Slowdive remix of "Frustrated Operator" will help while away the months (also, you can preorder the record here). The longtime legends add some alchemical stardust to the murky vitriol of the original, giving attention to the band's boy-girl vocals and making them purr. It's a sparkling, through still dark and dirty, reimagining of a hell of a song.